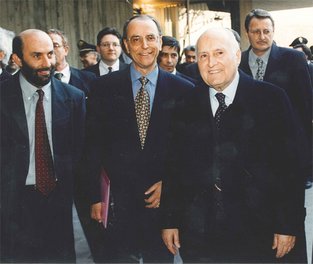 red by his words. I liked his message, I also appreciated the greetings addressed to the religious minorities in our country. Soon after I decided to write him a letter of thanks.
In my letter I thanked him for his faithful service to our nation in spite of his advanced age, for his commitment to the unity of the country, for the values he defended and for his solidarity in favor of the weakest. I thanked him for his sense of democracy, which means commitment, respect and tolerance. So I ended my letter by wishing him the richest blessings, wisdom for his task and for good health.
As soon as he received my letter, the President himself phoned my secretary and asked for me, but I was abroad at the time. Scalfaro wanted to know the date of my return to invite me to the Quirinale, the presidential Palace. He wanted to meet me and thank me for the beautiful letter he had received. So on January 28, two weeks later, I went to meet him. Our meeting was very cordial, very pleasant. It lasted approximately one hour. Before leaving, he told me: "Pastor Mazza, before you leave, please read me something from the Word of God." After that he also asked me to pray, which I did gladly.
It was just the two of us, it was a solemn moment. After that first visit, I went to see him many times, first at the presidential Palace, then in the Senate, and finally in his home. A true and lasting friendship had developed through the years. Every time we met, we always read the Bible and prayed together. Each time I visited him, he would eventually ask me again and again: "Pastor Mazza, you didn't come just to listen to my endless talking. Please let us read the Bible together." We always ended with a prayer of blessing.
One year after our first meeting, following an invitation of the Italian church, Scalfaro came to visit the Adventist nursing home in Forlì, "Casa Mia", that had just finished a project of expansion and renovation. It was a great celebration, with the national TV broadcast.
President Scalfaro was an extraordinary man. On the one hand authoritatively determined, with a strong personality, but at the same time humble, sociable, with a strong sense of duty with no corruption, neither scandal. He had a tenacious memory, an enviable dialectics, and an unprecedented political culture. He was a man of integrity and devotion to God, a true witness for the Lord. He was a sober, capable and responsible politician, with an extraordinary long career behind him, a politician who stood up for the right. President Scalfaro was able to handle very difficult periods in the history of Italy.
To me he was like a father, a friend, a brother in Christ. Although we belonged to different religious denominations - he was a fervent Catholic and I, an Adventist pastor - it never limited the pleasure of meeting and discussing together. Both of us kept our religious identity, but I was impressed by his open mind, I miss him!
Scalfaro was the President of the Constituent Assembly after Word War II. He was a father of the Italian Republic. He “wore out his shoes” running through our country defending the principles and values of the Italian Constitution. He was very jealous of the Constitution as a guarantee of our democracy. His slogans, when he spoke of the Constitution, were: "The state is everyone's home". "Before the Law, all men are equal", "The State and the Church are sovereign and independent", "All religions are equally free before the law." His final tribute to me was: "My dear pastor, I am sending you a big hug because I’m moved by your words of encouragement, you have enthusiastically told me that the Lord still needs me even at my advanced age of 93... ".
A great man in our nation’s history, has fallen asleep in the Lord. Thank you, President, for your great example of faithfulness! In the book of Revelation we read: "Blessed are the dead who from now on die in the Lord. Yes, says the Spirit, that they may rest from their labors, for their deeds follow them "(Rev. 14:13).