Adventist News - “Lasciato nudo e crudo. Diario di un analfabeta” ("Left only with the clothes he stood up with. Diary of an illiterate”) written by Castrenze Chimento, will finally be in bookstores in May, it is the winner of the 28th edition of the Parish Saverio Tutino, and published by Terre di Mezzo.

Castrenze Chimento was born in Alia in 1935, he learned to read and write at the age of 74 in order to tell his story: "The Odyssey of my life is a very sad story, yet it was worth living." Awarded the Pieve Saverio Tutino Prize, he was promoted from the Archives of the diaries of Pieve Santo Stefano, in the province of Arezzo, later the jury awarded him first place with the following reason: "From his childhood he recalls abuse, neglect and violence, yet he writes with a graceful, poetic and idealistic touch, capable of an almost magical empathy as seen in nature and animals. " thus wrote the Adventist News on October 1, 2012.

Abandoned by parents while still very young, Castrenze spent his childhood working as a caretaker of livestock and farm laborer for several unscrupulous bosses who often beat him up. As an adult, he left the country and went to the village, where life continued to be very difficult. Then, in the midst of his obstacles, he met a kind employer, who lead him towards the Adventist faith. "It was the turning point of my life," writes Chimento.

His story became the subject of the documentary film “Chimento Castrenze. Nudo e Crudo. Studio per un ritratto” ("Chimento Castrenze. Only with the clothes he stood up in. A portrait study"), with Iranian director and documentary filmmaker Panahi Nosrat Nejad. The film has scenes taken in the Caves of the Saracens, in Alia, and in the district of "Mountain of the Stars", the childhood home of Chimento. There was even a play on the life of Castrenze produced by a company in Palermo called "Scaldati”.

"From an early age Castrenze felt moved to write his life story so that the bad things that happened to him would not be repeated in the lives of other children," said Thomas Failla, Head of Communications of the Seventh-day Adventist Christian church in the Sicilian capital. "It was an inspiration which he believes was given to him by God," he added. 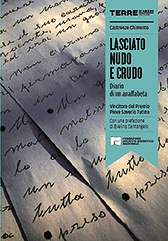 Chimento has been a guest in some television programs and was honoured and celebrated in his native town, Alia. In May, he was invited by the Mayor of Porto Empedocles (city of Pirandello, Camilleri and other important people) and is planning to meet there twith the local students.

The director Nanni Moretti, who attended the award ceremony Pieve Saverio Tutino, 2012, showed great interest in Chimento’s story for filmmaking. The National Diary Archive of Pieve Santo Stefano holds diaries, memoirs and letters of the Italian people since 1984, and to date has collected more than 6,500 documented life stories. A true treasure that draws publishers, actors, writers and directors.

"Currently Castrenze is preparing a draft for a second book that pursues the story of his youth, the path from Alia to Palermo, the discovery of faith and of the Adventist Church," said Failla.