1. Brother Sovis, Please tell us very briefly who you are

My name is Zdeněk Soviš and I am 52 years old. I live with my wife Jaroslavala and our son Zdeněk in Brno, Czech Republic. Our daughter Noema lives in Germany. My original profession was a bookbinder. Since 2002 I work as a caregiver. In my local church in Brno- Stredni I serve as a Sabbath school teacher. I also minister as a lay preacher in Brno and the neighbouring churches. 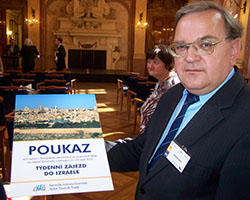 2. How did you become an Adventist?

I grew up in an Adventist family together with my 6 siblings. My mum had a great influence on my faith and relationship to the Word of God. Also the children Sabbath school had a great impact on me. I can never forget the church aunts, who taught me the Bible stories. And I also still thing of the Bible competitions we used to have in Znojmo church.

3. Why did you decide to participate to the EU Bible Championship?

In the year 2000 I saw a poster in our SDA church in Prague – Strasnice, inviting to the 1st Czech Republic Bible Championship in 2001. So I took part in it. Since then 7 Czech Republic Bible Championships took place and I participated in all of them. We are competing in teams made of 4 people. Twice we were third, twice second and twice the very first; that was in 2002 and 2006. In 2006 our prize for winning the first place was a trip to Israel. I fell in love with Israel and that was one of the reasons, why I wanted to compete again. As a team we wanted to go to Israel.

The championship takes place in one of the Parliament House rooms at the Czech Republic.

We meet with competitors from different church denominations. The main goal of the competition is to turn attention of the public to the Book of books. The Bible championship wants raise awareness of the Bible within our nation.

The Bible championship is not only about competing, but also about relationships. We have a great opportunity to opening relationships with believers from various denominations and getting to know one another. Through such friendships we can share God´s truths about these final days.

Czech Republic Bible Championship ceased to exist, but I wanted to continue in the Bible competitions. So the new European Bible Championship was a great opportunity to go through a new experience, to meet with the previous and new competitors and also to compare our knowledge with the European teams.

4. Tell us briefly your impressions about the Championship

25 teams participated in the European Championship; 10 of them from abroad. The participants were from Bulgaria, Ukraine, Switzerland, Latvia, Netherlands, Slovakia, Czech Republic, and one lady from the USA. Expectations and tension prior to the competition was evident.

In the first round each member independently completed 70 Bible questions in 60 minutes. The questions were multiple choices, having to choose one from 5 possible answers. No aids are allowed. The foreign teams had their questions in their languages. Then all 7070 answers from the 100 participants were checked and counted points for each team.

The afternoon finals were in the Knight's hall in a very festive, and also tense atmosphere. Everybody was waiting, which 3 teams with the highest score will reach the finals. The finals were shot by the public Czech television. Each team was given 7 questions; 1 point for every right answer, 2 minus points for every wrong answer. Each team got a new Bible. Our team was thanks to God doing very well. We got 5 answers right and that made a record of the championship. The team in second place had 1 point, and third place had 0 points.

Then came the ceremony of handing diplomas, cups and prizes. Our prize for winning first place was a trip to Israel in September of this year. We didn´t expect to succeed in such a stiff competition. In our team I was the only Adventist. Two members of my team were from the Roman Catholic Church and one from the Brethren Church. I was also the only Adventist from the Czech Republic. All 3 teams in the finals were from the Czech Republic.

In the evening news of the Czech television was a report from the Bible Championship. Many people from our country could hear about the Book of books.

My impressions from the championship are amazing.