Florence, Italy [Raffaele Battista]. Although the General Conference Executive Committee has never voted on an official statement regarding the Seventh-day Adventist relationship to the ecumenical movement as such, a number of articles have appeared over the years in Adventist publications, including the Adventist Review. Thus, while there isn’t any official position, there are plenty of clear indications regarding the Seventh-day Adventist viewpoint.

With this, we try to carefully and thoroughly reconcile the theme of the Remnant and the prophetic mission of the church, along with our commission from Jesus to witness to those around us.

It is important to understand that the testimony becomes an active collaboration between us and Jesus. We can be sure that Christ never shrank from conflict with the orthodox theologians of His day, every time the discussion was on salvation, solidarity or rehabilitation of the excluded and the marginalized. And, It did not matter the reason for their conditions, social, physical or religious. You could say that Jesus was free from shackles of all kinds. He was the Master, the promised Christ, He came to redeem His people. And that is infinitely true. But, could we say, therefore, that Jesus was indifferent to religious issues of Israel, or towards the ideal of unity and orthodoxy of the chosen people? I would answer, “Not at all”. Jesus always spoke to Israel assuming the character of a Jew, still faithful to the Hebrew Scriptures, and for this reason was able to live His messianic dimension to the full, as Messenger of God, the One promised to the fathers and the Son of David. He wept over Jerusalem (Matt. 23), and His fatherly accusations towards the Pharisees, amply demonstrate the fact. Thus, we conclude, and not surprisingly, that Jesus is the spiritual model, also for those who want to balance such essential needs as mission, identity and service.

The key point that we are considering, as mentioned, however, is not the willingness to talk, or not to talk to others about our faith, or to work or not to work with neighbours. No one today, would ever propose such a moralistic pattern, following a model of religion, openly classist and racist! Ultimately, who would, as third millennium Christians, follow the path of the self-righteous Pharisees? The answer to such a rhetorical question is obvious. But, even if we might all agree on this issue, we would never on the next topic coming up.

Could it be considered appropriate for us to associate with those different than us, to collaborate as partners, in religious, social and even political programs?

And, again, is it legitimate to mingle in local federations of churches, participating as a regular member with equal rights and duties? Is such an association an obstacle for the advancement of the prophetic specific mission of the Adventist Church, until it ends up, according to some, as betrayal and apostasy?

At this point of reflection I would like to make a decisive turn, carrying the reflection from a principle, universally valid, to that of opportunities. (it seems to me that this is the ethical and theological horizon of the official document in note 2) We are a universal church that cares about each unit. We are sometimes required to give up something in the name of conservation. We do it willingly, as a transatlantic journey (the church) is not comparable to that of a speedboat but, even the transatlantic liners may need small and fast boats, capable of accomplishing missions suitable to their shipload.

Metaphors aside, in those countries where there are favourable conditions for a federate association, churches should be granted individuality and such a possibility should be seriously considered, especially when the national community will also benefit from it. I do not think only of those battles for the defense of human rights, ecology and health; but also to the paramount themes of Christian preaching.

Included is also the vision of God as a personal Being, One in Three Persons, the Incarnation, Death and Resurrection of Christ, and the work He carries out as the One Redeemer and Mediator between God and man.

As an Italian, I agree, in principle, on the accession to FCEI. The book of Ecclesiastes says that "there is a time to embrace and a time to refrain from embracing." A healthy church, mature and conscious of itself and the world around us, should be able to assume responsible and flexible attitudes. Thus, to approach and move away, if necessary.

Personally, I tend to use the word "brother", with loyalty to others and to myself. It conjures up thoughts of contentment, but I will not use it for reasons of political correctness. 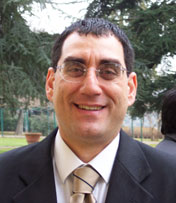 Christian brotherhood is not a dimension created by man, but a value that comes from a confession of faith that unites us. While favouring accession to FCEI, I understand some of the reasons why people continue being perplexed or even being openly opposed to this possibility.

If sectarianism or intolerance is dangerous, then isn't tolerance also dangerous if it is a purely diplomatic façade? In fact, the Lord asks us "to be one as He and the Father is one." It is clear that good relations and peace, also understood as a mere absence of war, are far more preferable to their counterparts. They are welcome embraces, especially if they persist even after sharing beliefs on controversial topics, and especially when, together, we will bring one more person to understand the mystery of the Cross.