Bruno R. Vertallier, 61, was re-elected as the Euro-Africa Division President June 28 by the delegates of the world church at their business session in Atlanta. Vertallier was appointed by the church’s 246-member Nominating Committee and confirmed by the General Conference Session delegation, which is an international body of 2 410 appointed members and the highest governing body of the church.

Vertallier was raised in the family of an Adventist pastor and missionary. He completed his theological education at Saleve Adventist University in Collonges-sous-Saleve in France and earned a doctoral degree at the Andrews University in USA. During his 36 years of denominational service, he has served as a church pastor, departmental director in Madagascar, seminary teacher and church administrator in France and at the division headquarters.

The division secretary was also re-elected by the same process. Gabriel E. Maurer, 52, third generation Adventist, was also raised by a pastoral family. He studied theology in Germany and England. Maurer worked as a pastor as well as a theology and religion teacher. He was the Division Ministerial Association Secretary for six years and has been the division secretary since 2003.

The session also elected a new treasurer to replace Peter R. Kunze, who announced his intention to retire. The new treasurer, Norbert Zens, 44, graduated from the University of Passau in Germany with a degree in Business Administration. After graduating, he worked for several companies in Germany. Later, he was the Business Manager of the Bogenhofen Seminary in Austria for nine years. Since 2004, he has been employed by the General Conference Auditing Service. 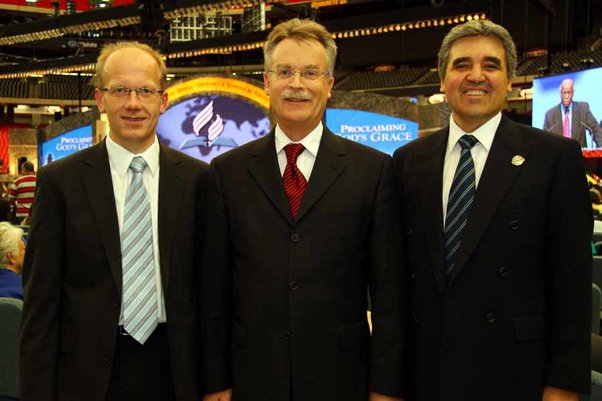