Governor of Colombia’s North Santander state Edgar Jesús Díaz, commended the work of the Seventh-day Adventist Church for its health impact across the city of Cúcuta during a two-day impact earlier last month. During the event, more than 20,000 books on health and hope were distributed, a health expo on the eight natural remedies was held, dozens of disabled individuals raced on their wheelchairs and dozens of fruits and grain sacs were distributed on May 9-10, 2015. 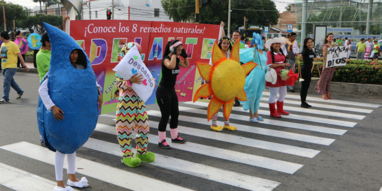 Church members led creative activities like mime performances, a health train activity led by children, a drama performance of members carrying a coffin representing the short life of someone who does not take care of his/her health, held up positive health messages at traffic lights and more.

More than 200 people engaged in the health expo which featured eight main stations on the eight natural remedies “I Want to Be Healthy” initiative led by the church throughout the Inter-American Division territory.

The health and hope impact in Cúcuta was an evangelistic one which falls under the world church’s evangelism during this year, said Pastor Joel Jaimes, president of the church in Northeast Conference, and organizer of the event.

Church members went early to church and left their pews at 10 in the morning to distribute some 20,000 books featured this year across the Adventist world church called “Health and Wellness: Secrets that will change your life,” edited by Mark Finley and Peter Landless.

The activity in the city of Cúcuta, which borders Venezuela, becomes the fourth city-wide health impact to be organized by the Seventh-day Adventist Church in North Colombia during the past three years. The church has done impact in the cities of Bucaramanga and most recently in Medellin this year where thousands took to the streets to offer hope and a healthier lifestyle through a number of activities.

An Adventist-organized clinic that provided free healthcare to 34,000 patients in two weeks in Zimbabwe has not only astonished organizers and the country but also promises to shape the Seventh-day Adventist Church’s work going forward.

The mega clinic ended Friday, May 29, after 550 volunteers provided about $2.5 million in basic health services to long lines of people in a shopping center in Chitungwiza, a city of about 365,000 people located a 30-minute drive south of Zimbabwe’s capital, Harare. 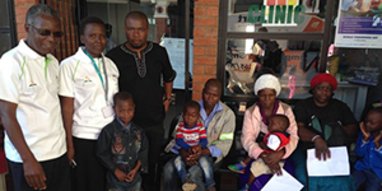 “The Chitungwiza Health Expo has sent a message to the world that God’s plan to help people be balanced … physically, mentally, socially, and spiritually is a powerful plan,” Adventist Church president Ted N.C. Wilson said, as he thanked the volunteers during an evangelistic meeting in a field directly beside the shopping center.

Peter N. Landless, the Adventist world church’s top health officer and a board-certified nuclear cardiologist, said this was the first time that he had seen a free clinic care for so many people on a sustained, daily basis, and he suggested that it offered a model for the church to replicate elsewhere.

An Adventist university in Mexico’s poorest state is finding that free root canals and eyeglasses are softening the hearts of a neighboring community that was once so hostile toward the school that it seized a chunk of its land.

Some 135 teachers and students from Linda Vista Adventist University treated hundreds of people in Rincón Chamula, a community of 1,500 people located 1.5 miles (3 kilometers) from the campus.

The university and community are located in Chiapas, a southern Mexican state bordering Guatemala that has faced volatility linked to drug trafficking and related violence. 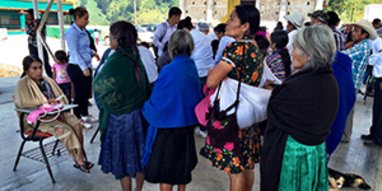 Students from the university’s school of nutrition held health and nutrition talks, shared healthy food, and also gave away hundreds of articles of clothing. The school’s Master Guide club also helped out.

The Adventist Church has sought to care for people’s physical and spiritual needs since its origins in 1863, but its has placed an increasing emphasis on blending the two in a “comprehensive health ministry” during Wilson’s five years in office.