On Friday, January 9, 2009, the Follow the Bible rally reached the Euro-Africa region (EUD). Pastor John Rathinaraj, president of the Southern Asia region (SUD), personally brought the special Bible prepared by the General Conference of the Seventh-day Adventists from India to Germany. He was welcomed by Günther Machel, the South German Union president. John Rathinaraj handed the Bible over to Gabriel Maurer, the EUD executive secretary, as a symbolic passing of the Bible from the South Asia to the Euro-Africa region.

"In India we have strongly promoted the personal study of the Bible, because this is the only way we can ensure spiritual development in the context of such fast growth in the church," explained John Rathinaraj.

"Europe definitely needs a values generating source like the Bible. This could tremendously contribute to the increased happiness and meaningfulness of life in postmodern Europe," commented Gabriel Maurer.

Beginning in Frankfurt am Mein in Germany, the special Bible that embodies and symbolizes the program and is translated into 66 different languages will travel through most of the European countries belonging to the Euro-Africa region. Finally, in March 2009, the Bible will conclude its journey through our territory in Paris, France.

Launched on October 11, 2008, during the General Conference Annual Council in Manila, Philippines, the Follow the Bible rally was designed to draw fresh attention to the importance of the Bible for believers in today's society. Celebrated by 10,000 Adventist believers, this special Bible was dedicated and sent on its journey around the world. It is a unique Bible, since each of its books is written in a different language – including English, French, German, Czech, Spanish, Portuguese, and Romanian – which represents the accessibility of each language and culture to what God still wants to tell us through His word.

Seventh-day Adventists believe that the Bible is God's revealed Word to humanity to give orientation and help people live happy, meaningful lives on this planet. In a materialistic and individualistic world, the Bible becomes more and more relevant by providing important values for the survival of today's generation as well as guidelines for building and maintaining satisfying relationships among fellow people. This is why the Follow the Bible rally wants to promote both personal and collective study of the Bible.

During the next two months, the special Bible will visit our theological schools and educational institutions, administrative offices, and local churches. The Bible will be a part of many special events.

The next event in the rally will be a special morning worship service on Saturday, January 17, 2009. The program will be broadcasted from the German Media Center through the TV satellite system. The two German Union presidents, Günther Machel and Klaus van Treeck, will present the special Bible and encourage fellow believers to study the Bible. 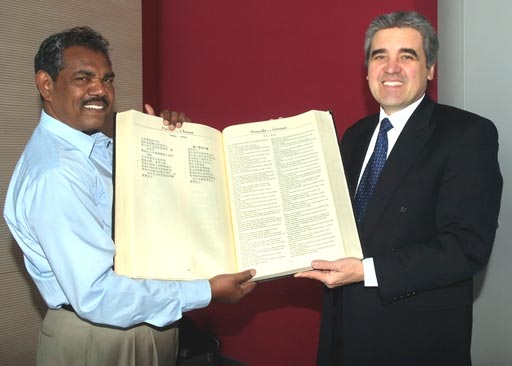