During his first visit to Nigeria in a decade, Seventh-day Adventist world church President Jan Paulsen spoke about the church's commitment to education and life governed by integrity in his address at Babcock University graduation Sunday.

Adventist world church President Jan Paulsen speaks during Sabbath church services at Babcock University, where he once served as principal.

Once a missionary to Ghana and Nigeria in the 1960s, Paulsen participated in the 50th anniversary celebrations of Babcock University, where he once served as principal. Initially established as the Adventist College of West Africa (ACWA), located in Ilishan-Remo, Ogun State, some 70-kilometers north of Lagos.

"We are committed to doing our utmost in education, health and social issues and... to be good partners in building community," Paulsen said during a meeting with Goodluck Jonathan, vice president of Nigeria in the nation's capital, Abuja, on June 4.

"[Adventist] standards are exceptional," Goodluck told Paulsen, referring to the church's impact on society in Nigeria. 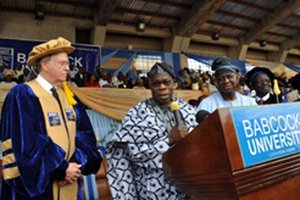 During his visit, Paulsen also met with the country's former president, Olysegun Obasanjo. "Babcock University made a mark among private universities in Nigeria," Obasanjo said, applauding the church's dedication to character building and moral values, which "other universities tend to ignore."

Remarking on Obasanjo's involvement in conflict resolution in Zimbabwe, Somalia and Congo, Paulsen called the former president a "minister of peace and reconciliation on the African continent." Obasanjo added that he returned home the previous evening from Sudan where he was involved with peace talks.

Obasanjo, who received an honorary doctorate from BU in 2003, also participated in the graduation ceremonies on Sunday, June 7, where he praised church members for their honesty.

During a visit with a group of 10 chiefs from Ilishan-Remo, Paulsen thanked them for their support -- local chiefs originally donated 486 acres of land when the church established BU in 1959. "You gave land to establish a school in Ilishan-Remo. Such a decision required vision and hope for the future," Paulsen said, calling the move an "investment" in the community.

In 1964, Paulsen joined the college as a teacher and registrar, three years later becoming its principal.

During his commencement speech, Paulsen said he hardly recognized the area. "There was only one dirt road that led between old bakery buildings at one end to the staff houses. We began where every such institution starts -- small. And look where you are now," he said.

During his baccalaureate address Paulsen congratulated the new graduates and spoke about identity and Adventist values and education.

"I want the Seventh-day Adventist Church in Nigeria to be a healing community," Paulsen said. "Our education... deals with the wholeness of a person. We want people to know that we are not only dealing with a faith-based reality, but a physical reality, too," he said.

Addressing the issues of HIV/AIDS and malaria, Paulsen told the congregation that the church would continue to collaborate with religious and secular organizations to "create a good and healthy society [and] a better future for our children."

The church's first college in sub-Sahara Africa soon sought broader accreditation outside of the Adventist Church. About a decade later, the school began offering theology degrees in partnership with Adventist-owned Andrews University in the United States. Some 40 years later, the school transformed from a primarily ministerial institution to a multi-disciplinary school, adopting its current name, Babcock University, in 1999.

Today, the university has an enrollment of 6,000 and offers 30 degrees ranging from theology, law, and public health to technology, agriculture and mass communication.

Paulsen was also briefed on the early stages of expansion plans for the university, which include establishing a health and medical sciences complex.

Speaking at the graduation on behalf of the country's president, Babutunde Osotomehin, Nigeria's Minister of Health referred to BU's "outstanding contribution to life in Nigeria" and challenged the university to integrate research with its plans to open a medical school.

"Devote 30 percent of your resources for research," he said. His remarks addressed the larger issue of the importance of research for the benefit of nation building. "It is only through [research] that we can make progress, because that is where national development, national security, growth and indeed the heritage we are to leave for the people come from," he said. He lauded religious groups for their contribution to Nigeria's education and development.

Matthew Bediako, the Adventist Church's world general secretary and an alumnus of the college, referred to BU's "bread basket beginnings." The university complex has grown from a single bakery on campus to include health-food production, four banks and a water-bottling factory.
About 30 percent of the university's students are Adventists, giving the school a mission emphasis, Bediako said.

Nearly 1,000 people joined the church this year as an outcome of an evangelistic outreach program conducted at the newly commissioned university stadium by evangelist Mark Finley, a general vice president of the world church.
"When each school year ends, the number of students who graduate as Adventists increases," said J. A. Kayode Makinde, BU president and vice chancellor. "Our school emphasizes spirituality and shares Adventist values with those who study here."