On July 16, Adventist World Radio will begin airing programs in the Lao language to listeners in the country of Laos. “This is a historic occasion,” says AWR president Ben Schoun, “as this will be the first Adventist media broadcast to the people of Laos in their own language.”

Laos is a small country with population of about 6 million. Ethnic Lao, the principal lowland inhabitants and politically‐ and culturally‐dominant group, make up the bulk of the Lao Loum population. Most people live in the valleys of the Mekong River and its tributaries. Vientiane prefecture, which includes Vientiane, the capital and largest city of the country, has about 700,000 residents.

Lao is a communist country with very stringent regulations on religious liberty. Public evangelism is restricted. There have been instances of the Laotian government attempting to make Christians renounce their faith and have several times closed down Christian churches. Often, the government officials are also known to detain clergy because of their religious activities.

In August 2008, the AWR studio at Mission College in Thailand took up the challenge to produce Laotian radio programs to broadcast from the AWR shortwave station in Guam. With the help and guidance of Pastor Surachet Insom, AWR Thailand coordinator, Pastor Brian Wilson, of the Southeast Asia Union Mission translation center, took the initiative of working toward this goal with a few Laotians students studying at the college. Recently, the team found a key church member in Laos, Brother Boala, to produce these programs.

AWR will broadcast the Lao programs from Guam, which can be heard every Thursday and Saturday between 8:30 and 9 p.m. local time. Listeners can tune their shortwave radios to 11880 KHz on 25‐meter band. In addition, AWR also plans to reach the hearts of approximately 700,000 people in Vientiane through FM radio programs broadcast from the Thai province of Nongkai.

“We praise our Great God for His providence throughout the radio work,” says AWR Asia/Pacific program director Anniston Matthews. “He loves every Laotian, and desires to reach out to all people in this country.”

Matthews adds, “The studio needs your help by contributing stories, features, and music for producing quality radio programs. Everyone can contribute by sending articles or ethnic Lao Christian music to AWR Thailand at awrthai@hotmail.com.” 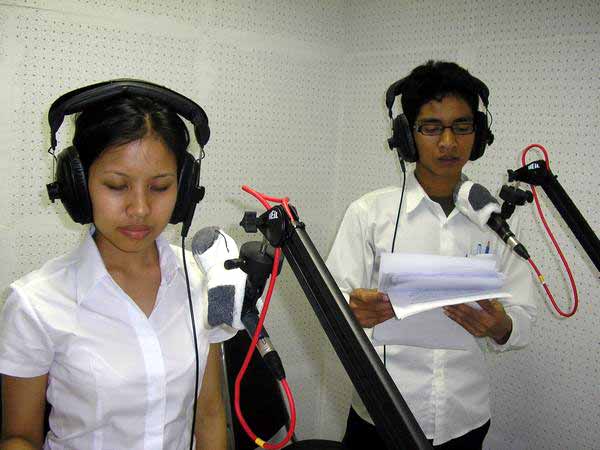