The “A-Z” private denominational school was founded in Zurich 55 years ago. However, the school’s location in the bustling city center was no longer conducive to the concept of holistic Christian Adventist education. Beginning about 20 years ago, the school's constituent churches started feeling that the school should be moved to a more natural setting on the edge of the urban environment. This vision encouraged the initiators (Heinrich Walder, Ivan Fagioli and others) to convince the executive boards and the churches of the German Swiss Union Conference to support the idea.

Over the past 20 years, the planning commission visited 30 potential sites. However, even after finding an ideal location outside the city, it seemed that the dream of a new school would have to be abandoned for another set of problems began to surface. This time, problems came in the form of official construction requirements and a neighbor who wanted to prevent the construction.

These problems allowed God to work miracles. First, the state construction office granted authorization to build a school in a 90% occupant density area. Second, a consensus was reached with the local authorities on the building cube and multi-function rooms. Finally, an agreement was reached with the neighbor. Construction was completed in the spring of 2009.

In his key address, Jan Paulsen emphasized that all men have a problem that only God can solve. It has to do with the relationship between man and God. Man cannot make God feel merciful, nor can he reconcile himself with God. Mercy has to come from God (II Cor. 5:16-21). Anyone who accepts reconciliation with God is called to share this message with others. “Talk about your experiences with God with your children,” Paulsen encouraged the audience.

In order to complete the new center, God intervened many times in difficult situations and opened doors where it seemed that there was no hope at all. The building has been completed, but the real work is just beginning. The new center is meant to be a meeting place for children and adults. A place where neighbors can seek advice and guidance and become better acquainted with the love of God. 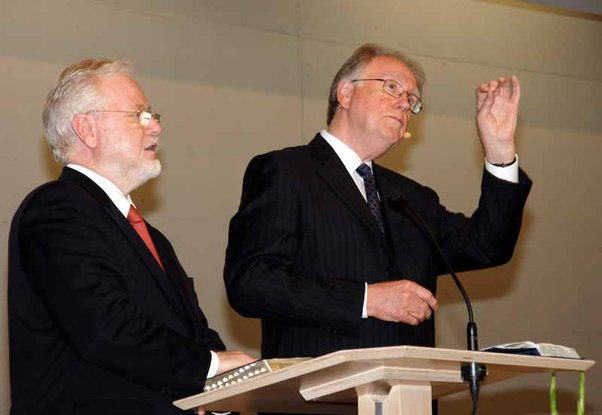 Jan Paulsen and his translator Ivan Fagioli addressing the assembly.