On May 23, 2010, a ceremony honouring the memory of Pastor Walter Guy Bond, an Adventist pioneer missionary to Spain, took place in the municipal cemetery of the city of Baeza in Andalusia. Pastor Bond's name was added to Baeza's wall of honour arranged in memory of all those who have died to defend their convictions and the causes of peace, freedom and democracy.

Baeza's mayor, D. Leocadio Marín, Mrs. Marín, and a city officer presided over the ceremony. The Adventist church was represented by the President of the Spanish Union, Elder Jesùs Calvo; Director of the historical archives of the Spanish Union and event organizer, Elder Andrés Tejel; as well as other pastors and numerous church members. A commemorative plaque was unveiled by the representative of the Adventist church in the Euro-Africa region, Elder Roberto Badenas.

Walter was born in California, USA, on February 6, 1879, to a strongly religious family. His parents, James and Sara, raised 10 children and an adopted girl. They became Seventh-day Adventists while Walter was a child. When his father became an Adventist, he quit farming and became a physician. After finishing his studies in medicine, he created a clinic in California.

Walter graduated in theology at Healdsburg College in 1899. In summer 1902, Walter and his brother, Frank, attended a camp meeting in Fresno, California, where A. G. Daniels challenged the young people to engage in missionary work. Along with 30 others, Walter and Frank responded to the call. Walter married Leola Gerow on November 12, 1902. Walter, Leola and Frank sailed for Spain to work as missionaries. They arrived in Barcelona on June 22, 1903.

In June 1904, they baptised the first three local converts. Many others followed until they created the first Adventist Church in Spain. In 1905, Walter Bond became the leader of the Spanish mission. One of the first local members, Lope San Nicolas, also became a successful missionary. Lope raised considerable interest for the gospel in the little city of Baeza, located about 750 kilometres South-West of Barcelona. Lope invited Walter Bond to present a series of Bible Conferences there.

On October 13, 1914, Walter arrived in Baeza. On November 1st, a telegraph message was sent to Walter's brother, Frank, stating that Walter was about to die. Frank and Leola rushed to his side. Unfortunately, Walter died on November 12 at the age of 35. He left his pregnant wife with 3 children. The doctor told Leola that Walter had been poisoned. While dying, Walter said, “I forgive my murderers.” He was buried in the cemetery of Baeza. On January 6, 1915, his widow and children returned to the United States.

Sometimes between 1943 and 1945, Pastor Bond's tomb was desecrated, and his bones disappeared. During this period of Spanish history, many graves of the “enemies of the state” (democrats, republicans or simply non-Catholics) were exposed to such treatment with the idea that their memories would be wiped out for ever. During the past few years, Baeza city authorities have been restoring the monuments in memory of those who once stood against the totalitarian regime or were considered to be a “disgrace” to Spain.

To conclude the ceremony, the president of the Adventist church in Spain read a letter from the family of Walter Bond living in the States, and his favourite hymn “Shall We Gather at the River” was sung by the assembly. The event was widely publicized by the local media. 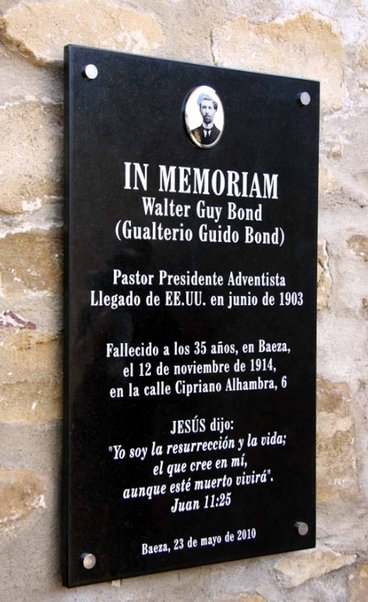