Recently, Stimme der Hoffnung Hope TV Channel has begun airing a new children’s series entitled „Arche Abenteuer“ (Ark Adventure). This fun show teaches youngsters about life and God. In 10 episodes, talking animals introduce children to the true meaning of the Biblical Ten Commandments. Day after day, Skunk, Monkey, Lion, Crocodile, Sheep and lots of other animals spend their time in Noah’s Ark. Of course, living on the ark is not always easy! The topics discussed by the animals have a direct relationship to the problems children face today. After all, we are all in the same boat, which is why we have a responsibility to the world we live in and to the people with which we share our lives.

The script for this new children’s series was written by Ulrike Müller, a certified social instructor as well as an educator and family counsellor. As a religious education teacher, she is researching and compiling Bible study materials for children. “Although many children have heard of the Ten Commandments, most of them don’t have a clue about what they mean,” states Ulrike Müller. “Our aim is to show children in a fun way how exciting the commandments of the Bible can be.” 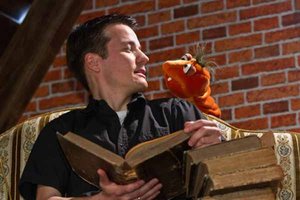 Beginning November 6, 2010, Fribonius Maximilian Balthasar von Einzahn (“Fribo”) and his friend Julian are going to share their discoveries of the Bible and the world with children aged 6-9. The program will air on Fridays at 6:00 PM, Saturdays at 2:30 PM, Sundays at 9:30 AM, and Wednesdays at 6:00 PM.

“Fribo” is a wood worm that comes from Woodstown (Holzhausen). Fribo loves to eat wood, of course. So, living in an old attic is very exciting. Fribo also loves to eat chocolate ice-cream, adores small animals and feels happy around lots of dust. What he doesn’t like, however, is going to the barber shop, the dentist or eating brussels sprouts! 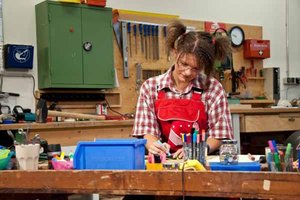 In her fantasy factory, Wilhelmina Ernestina Whirlwind (Miss Whirlwind) makes all sorts of crafts and exciting experiments. There is a special chest that holds many treasures such as books, games and CDs for kids and another discovery chest that contains lots of interesting information on animals, nature, different professions, etc.

Wilhelmina Whirlwind in her fantasy factory

“The Hope TV Channel’s motto ‘Interested in Life’ has been the main motivation for producing their own educational children’s programs,” says editor Naila Warning. “As a Christian TV station, we would like to show children that they can count on God as a partner in any situation including problems at school or at home and when they are sick or sad. They can tell God everything. We want to teach children that God loves and cares for them. It is worth investing in our children as they are shaping tomorrow’s world,” she adds.

In promoting Christian ethical values, the new series aim to counteract the enormous pressure and high expectations that children are facing in today’s society. All of the shows focus on promoting children's personal growth and creativity.

With its round-the-clock coverage, Stimme der Hoffnung provides programming on relevant topics and encourages people to personally study the Bible and become acquainted with Jesus Christ. Stimme der Hoffnung is a media center run by the Seventh-day Adventist Church, which is represented worldwide in more than 205 countries and has a total membership of about 16 million.