Alsbach-Hähnlein, Germany, March 9, 2011/ CD EUD. On March 5, HOPE Channel TV Germany broadcasted their two-year anniversary thanksgiving service from their headquarters, the Voice of Hope (Stimme der Hoffnung) Media Centre. “It was great to imagine the many people who joined us through satellite and shared the blessed time we had together,” said the Euro-Africa Region’s president, Bruno Vertallier, one of the special guests of this celebration.

Stephan Sigg, Youth Department Director of the Seventh-day Adventist Church’s Euro-Africa Region presented a dynamic message, entitled ‘Interested in Life,’ the HOPE Channel’s motto.
Based on Genesis 20:24-26, big rough stones were laid on the stage to represent the altar which God ordered Moses to build. The Israelites were not allowed to use hewn stones for the place of worship. Hence, rough stones symbolize that it is impossible to present any human works before God, and remind us at the same time that God accepts his children as they are. Relating to HOPE Channel’s motto, Sigg also referred to the growing dramatization of life by the media. This staging, Sigg said, is also observable in daily life whenever people pretend to be something they are not in reality. God, however, is interested in our real life. Because of this people must come to Him just the way they are, with their life just the way it is.

Prof. Wolfgang Thaenert, was present at the celebration, and expressed his great satisfaction for the high quality of work that has been done by the HOPE Channel TV in Europe. Prof. Thaenert is the director of LPR Hessen, the state regulatory authority for commercial broadcasting of Hessen, Germany.
Later on Bruno Vertallier gave special greetings to the leadership and all the dedicated people who are doing an excellent work through HOPE Channel TV in sharing the Gospel and bringing hope to Europe.

HOPE Channel TV Germany is a Christian station that has broadcasted a 24-hour program including worship services, programs for children, music and talk shows, various series about the Bible, documentary videos on nature, as well as health programs on the ASTRA satellite and on the Internet since March 2009.

HOPE Channel TV wants to offer answers concerning relevant life issues and help people access the Christian faith in an understandable and contemporary way. Their programs may be downloaded for free from the web site www.hopechannel.de/ programmheft.

This Media Center, under the direction of Matthias Müller is run by the Seventh-day Adventist Church, an officially registered organization, covering 206 countries worldwide, with more than 68,000 congregations and 17 million members. 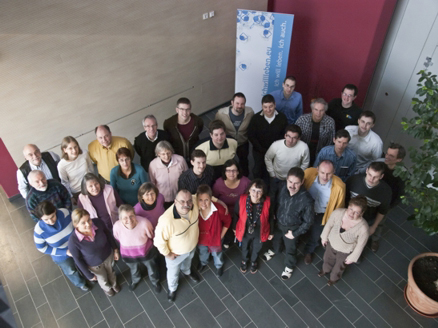