Freudenstadt, May 20, 2012. [CD-EUDnews]. The Mid-year Meeting, the executive committee of the Euro-Africa Region, was held this year in Freudenstadt, Germany. After the welcoming procedure, President Bruno Vertallier presented a devotional, commenting on Genesis 34, the chapter of the Bible in list for this day’s reading, according to the Bible daily reading program “Revived by His Word”.
A special welcome was given to the new Portuguese Union president, Antonio Rodrigues, and words of thanks were addressed to Klaus Van Treeck and EdoardoTeixeira, respectively of North Germany and Portugal Unions’ outgoing presidents.

President Report
The President highlighted some important concerns and challenges in his report.
“We are invited to live a Revival and Reformation in our church, according to the general theme of the worldwide Adventist church”, Vertallier introduced his report. “We are still at the beginning of this process, and I’m still dreaming for a revival in a balanced way.” The President emphasized once again the necessity of unity in the church.
‘Unity despite diversity’ continues to be a challenge for the church in Europe.
“Without unity it is not possible to work peacefully,” said Vertallier, inviting the members of the committee to give more emphasis to the real goal of the church. Even though respect for different points of view is a guarantee for a democratic organization as ours, the prominence of the Bible has to be our point of reference for unity and peace. “We are called to endorse peace in the church, and this will bring unity,” affirmed Vertallier, quoting the American writer E.G. White: “Cheerfulness and peac 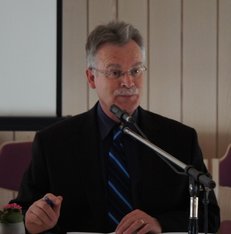 e will be the result of justification by faith.” Effectively, this specific doctrine of the Seventh-day Adventist Church needs to be applied practically more than just accepted on a theological and theoretical level. “This is not a simple invitation”, urged the President, “this is the core of the Seventh-day Adventist message. Accepting and living personally the meaning of justification by faith produces fruits like peace and unity showing automatically how Christ lives in us. This is the starting point of an authentic and personal evangelistic mission.”
The mission of the church continues to be the main challenge for the whole church in Europe, and the President reserved an important place for this issue in his report. Despite some results and statistics evidencing a tendency of slow growth, the Union Presidents were mentioned in the report as very involved in this field. In January of this year, an important commission on evangelism in the Euro-Africa region territories has been held under the direction of the Division. The active participation of most of the Union presidents gave a good impression regarding this challenge, to encourage important evangelistic campaigns in most of the European big cities. This is a project that will be launched next year in New York and will be continued in Europe. “I would like to thank you for your engagement in the mission”, said Vertallier, inviting the whole committee to pray especially for this huge challenge.
Finally the president addressed the administration personnel saying “thanks for your patience and good will, even when you do not find all the support you would have expected.” The report was adopted unanimously as a signal of appreciation for the leadership assumed by the president.

Secretary report
Gabriel Maurer, the executive secretary, shared in his report an interesting and alarming statistical study. He invited members of the executive committee to explore a picture of the church in terms of growth. The findings, reported clearly by diagrams, showed a decreasing tendency of the church in the countries belonging to Euro-Africa Region. 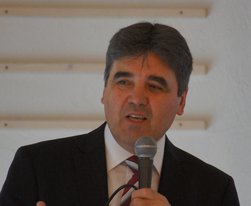 On December 2011, the church members were 178.168, a net increase of only 500 members. During the year, 4’174 new members have been baptized, and 488 members were accepted by profession of faith, but we registered 4’188 losses for death, dropping out and missing. How can we stop this hemorrhage?
“It is always helpful to study history in order to understand the present and to prepare for the future” said Maurer, “we have to give serious consideration to the present situation and face the alarming future we could experience.”
Confronted by this negative trend, the members of the executive committee were invited to contribute in order to move into a more positive direction in term of church growth. “We are here,” said the Secretary, “because God has called us to prepare for the glorious return of His Son Jesus Christ. What will the future of this mission be if we remain as we are?”
Voting this report, detailed and clearly outlined, the committee assumed the responsibility to be more involved and tackle this negative growth trend.