Rome, June 28, 2012. [CD-EUDnews]. Monday, June 11th, is a day that we will not easily forget. Together with Luca Alfano, the ADRA representative (Adventist Development and Relief Agency), and Emanuele La Mantia, AISA representative (Adventist Scout Italian Association), we went to the earthquake zone of Emilia-Romagna to deliver tents donated by AISA to the Civil Protection. It was very difficult to get there. Most of the roads were cut off, there were several detours and a very difficult journey. We saw collapsed sheds, farmhouses and damaged homes. Tents were set up everywhere, in small parking lots, on the front lawn of people's home. The fear was clearly felt.

"We have been anxiously waiting for you," told us the people of Mirandola. We met with the scouts of the AGESCI assembly (Associazione Guide E Scout Cattolici Italiani), who helped set up the tents and it was as if we had known each other for years. In all three municipalities we visited (Mirandola, San Felice sul Panaro and Camposanto) we received the warmest thanks and appreciation for our work.
"To feel useful is surely something that encourages us to continue, even if we do something small compared to

“The delivery of tents was a very special and touching moment for me,” continues Luca, “I'll tell you two episodes that impressed me a lot.”
The first concerns the welcome received by the AGESCI scout. (In Italy the Catholic scouts are very well known and any other group is not easily recognized). “Although we did not know the local group of MIRANDOLA, when we arrived we were immediately welcomed by them. We were greeted with the 'Scout-welcome'. Then, they helped us unload the tents, without waiting for our request for help. It was like as if we had known each other for a long time, and despite the different views on some issues, we felt very in-tune, indicating that a shared goal unites and strengthens cooperation,” said Luca.
Another thing was the appreciation of the local leaders. “I thought that due to thousands of commitments and surrounded by lots of people, we would be forgotten rather quickly. On the contrary, before leaving, they stopped their activities and discussions to come and thank us on behalf of all the people.
I did not expect so much gratitude. Instead, they were kind and appreciated our help very much.”

Included in this drive by ADRA and AISA Parma, there was a fundraising project called CHEESE-project. Thanks to these funds, on Saturday, June 30th, abou 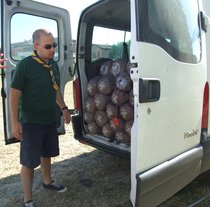 t 100-150 children from the "red zone" will be taken to MIRABILANDIA (a big Amusement Park), to enjoy a fun day with friends.

For almost a year the headquarters of ADRA & AISA Parma have been included in a project carried out by the City of Parma, called "LABORATORY TASKS", in which various local associations work together. Some of which are very popular. This project has been implemented in the areas affected by the earthquake, and all the associations forming this network are committed in providing this service. Educational materials such as pens, notebooks, etc. were distributed as well. They also provided entertainment with groups of clowns for children inside the camps. Many of the ADRA volunteers serve also as AISA facilitators, collaborators or guides. The AISA experience was certainly in their favor and contributed to the success of the project during the year.

ADRA Padua and Bassano - Nets and mattresses supplied in the earthquake zone
The earthquake that devastated the Emilia-Romagna Region, especially in the provinces of Ferrara, Modena and Bologna, was felt very clearly even in the low areas of the Veneto Region (north-east o 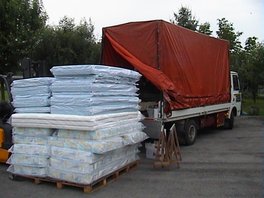 f Italy). The leaders and coordinator of the ADRA-Triveneto area, after an inspection in the affected areas and with the collaboration of the Civil Protection of Marostica, responded to the appeal made by a province of Mirandola (Gavello Modenese). They asked for a supply of beds and mattresses for a camp that was set up to accommodate the displaced in the area. Part of the supply was donated by the headquarters of ADRA Padua and Bassano del Grappa, the other part was given by ADRA Italy. The material was delivered a few days ago, by friends of the Civil Protection. Local people expressed gratitude for this concrete action. “We still need volunteers to fulfill the demands of targeted support. There are now about 30 volunteers in the various sections of ADRA who have given their full availability in the affected areas,” said Franco Evangelisti, local ADRA coordinator.