Istanbul, Turkey [Homer Trecartin; CD EUDNews]. The last few days the news has been full of pictures and descriptions of many tensions in Turkey. Turkey has been a part of EUD for many years and we know that many of you still have a soft spot in your hearts for the work there. We thought you might want to know what is happening with our church in Turkey so we contacted Homer Trecartin, President of the Middle East and North Africa Union, to ask him how all of this was affecting our people.

"In Turkey the protest really did start because people were not happy about a small park that was going to be demolished for a shopping center. It is the last park in that central part of Istanbul. Istanbul is a city of probably 25 million people (official statistics say less, but it is much bigger). It is almost 200 km from one end to the other. You can't see the end of the city even when you are flying over in a plane. It is huge. But when the peaceful demonstration was forcibly broken up by the police it made people angry and thousands have begun to protest across the country. Now they are protesting against the government and its excessive force and control in many different situations.

In Turkey the riots have been quite confined to central squares in the various cities and have not affected life in other parts. We have one family living a few blocks from the demonstrations in Istanbul but they are fine. Two of our ladies were shopping or doing business a couple of blocks away when the demonstration started and the tear gas drifted across and made them a little sick for a couple of hours, but other than that no one has been involved.

I was there last week just a couple of days before the protests started. I walked right through that square. We had our mid-year executive committee meetings there for the union. Everything was peaceful then.

There are millions of people in this part of the world who need to know what we know. We are praying for the money and people to move into the communities of these countries and begin to know and love their neighbors. Thank you for your prayers. We are praying that God will help things to calm down and will continue to open doors for our work to go forward." 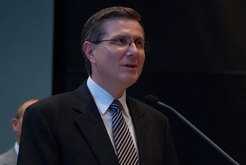 Seventh-day Adventist leadership appointed on october 2011 world church undersecretary Homer Trecartin to serve as president of the church's recently formed Middle East and North African Union. Trecartin had previously served as secretary-treasurer of the former Middle East Union and planning director for the world church's Office of Adventist Mission, among other positions. In Turkey we have 105 members meeting in three churches and a couple of small groups.

"We pray that the Lord of Peace may bring harmony and accordance between all conflicting parts in Turkey. We believe in freedom, we believe in justice, we believe in peace!", so Corrado Cozzi, Communication Department Director in the EUD Region.