The content of the site has also shifted to address a new audience: The general public, as opposed to primarily church members.

Adventist.org contains most of the same information as before, but it’s now presented in a more modern, graphically oriented look, and it’s accessible in four languages – English, Spanish, Portuguese and French.

“What begins as a relationship with a website can lead to a relationship with a brand; the research tells us this,” Garrett Caldwell, the denomination’s associate Communication director for public relations, told executive committee members of the 2013 General Conference Annual Council in Silver Spring, Maryland, United States.

“And if people can get to the point where they can trust a brand,” Caldwell added, “then they will want to know the product, and the product of the Seventh-day Adve 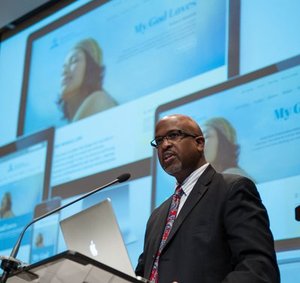 ntist church is every life that has been transformed by the message that we’ve been given and the God we serve. And I want people to find that transformation.”

The redesign is the most significant update since 2004, said John Beckett, director of the Adventist Church’s Office of Global Software and Internet.

One of the new features, he said, allows users to take advantage of responsive design technology, which means the website will automatically adjust itself to different screens sizes for optimal viewing, whether it’s being viewed on a smart phone or large computer monitor.

General Conference leaders are offering the new design to every denominational organization through the free tools and templates available at framework.adventist.org.

Planning for the redesign began more than a year ago in collaboration with Inter-European Division and its development team at the Stimme Der Hoffnung Media Center in Germany, whose Web experts had updated the division's website and then offered to collaborate with the General Conference’s own upgrade.

Before updating the European sites, Klaus Popa of the media center said his team looked at the existing webpages of the division’s 11 unions and noticed how graphically different they appeared from one another. 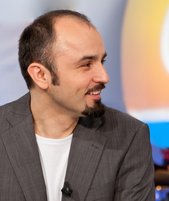 “They might be good in their own rights, with respect to design, with respect to technical features, they might serve the needs of this respective conference or union,” Popa said, pointing to a collage of the websites he displayed on the projection screen of the General Conference auditorium. “But looking at these websites like these, just paralleling them, we realized that the way we represent ourselves to the world, to the visitors of our websites, it’s a patchwork approach, it’s a confusing approach.”

Some 100,000 people each month perform Web searches using the English-language phrase “Seventh-day Adventist,” Caldwell said, suggesting that catering the site to the public can serve as a vehicle for evangelism.

“This is a completely reimagined experience of how to express who we are as Seventh-day Adventists,” said Andrew King, the GC Communication department Web manager who helped design the site.

Users of the redesigned site will open the main page and find personal testimonies of Adventists, along with photos or videos of their stories. The same top portion also includes a section titled “Adventist Beliefs,” which includes a link to the church’s 28 Fundamental Beliefs in a PDF document for easy printing.

Users can still find features that were more prominent in the previous design, such as a directory of church institutions, in the Information tab.

The multi-language feature, church locator, and sitemap are also accessible from the tabs at the top of the page.

Under Spirituality, one can learn about the Sabbath, download Bible study guides, read about prayer and find out more about prophecy. The Vitality section offers information on family life, health and education. The Service component displays details on missionaries, humanitarian work and religious liberty.

“Rather than communicating the structure of our church, we’re trying to communicate the impact that our ministries can have on your life,” Caldwell said. “We want people to know that Seventh-day Adventists are committed to making the world a better place.”

"This web site is the result of a common vision, a fruitful teamwork and God's mighty wisdom", so the Inter-European Division's Communication Team, Corrado Cozzi (Director) and Andreas Christian Mazza (Assistant). "If God gives you a Vision and you believe in that Vision - together with your Team - there is no doubt that God will make that Vision come true!".