Bucharest, Romania [Adrian Bocaneanu; CD EUDNews]. The American documentary producer Martin Doblmeier visited Romania on May 16 and 17 and was honored with a plaque from the Adventist Church on the occasion of the public Romanian premiere of The Adventists and The Adventists 2. The events were jointly organized by Speranta TV (Hope Channel Romania) and Banat Conference of Seventh-day Adventists, one of the six conferences in Romania, covering the west side of the Eastern-European country.

Martin Doblmeier is the owner of Journey Films, a company he founded more than 20 years ago to produce documentaries on faith and spirituality and the way they determine attitudes and actions in the social arena. Some of his movies are a portrait to some outstanding personalities, such as Albert Schweitzer, the revered organist and accomplished Protestant theologian who turned his back to his career and studied tropical medicine in order to dedicate the second half of his life to Africa, or Dietrich Bonhoeffer, the Lutheran teologian who stood up against Hitler in many different ways when churches were supportive of him by conviction or by fear; other films feature small communities with a common spiritual vision and mission, such as L’Arche Community, innitiated by Jean Vanier, who brought together people with mental handicaps and treated them according to the spiritual principles contained in the Sermon on the Mount. 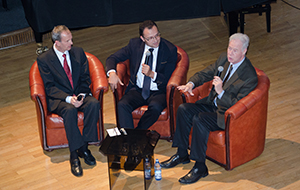 For the last five years, award-winner Doblmeier became interested in a relatively small Protestant denomination, the Seventh-day Adventists. As he himself explains, “on one hand they have adopted rather conservative theological positions, such as their belief in Creation; on the other hand they are on the cutting edge in revolutionary medical equipments and procedures. They are committed to the doctrine of the soon return of Christ, however they devote themselves with unusual efforts to improving the life of believers and society here and now.”

In 2010, Martin Doblmeier premiered The Adventists. After a brief historical introduction, the one-hour documentary zooms in the life principles and practices which made Adventists among the most studied populations on the planet, with remarkable advantages as far as longevity and the incidence of chronic diseases are concerned. They also run a huge network of health care institutions which are faithful to the initial Adventist understanding of the holistic nature of the human being and are very deliberate in designing and adopting the latest technologies in medical diagnostics and treatment. The documentary was extensively distributed on the public television PBS, with an outstanding response from the public and was also rewarded with a Gabriel award.

Three years later Doblmeier launched the documentary The Adventists II, bringing together seven stories of Adventist medical mission on several continents, such as emergency aid after the calamitous earthquake in Haiti, boat medical mission on the Amazon, rehabilitation of the Adventist Hospital in Malamulo, Malawi, and the development of the Sir Run Run Shaw Hospital in the Popular Republic of China. This was also presented on PBS and was a best-seller on the online distributor Amazon. After the first and the second film, Adrian Bocaneanu, international projects director for Speranta TV (Hope Channel Romania), extensively interviewed Martin Doblmeier for his show The Starting Point.

This April, Martin Doblmeier came with a third film on the Adventists, this time on their educational vision and institutions: The Blueprint: The Story of Adventist Education. The term Blueprint comes from the writings of Ellen White, a co-founder of the Seventh-day Adventism and a prolific writer on a variety of topics such as spirituality, health and education. 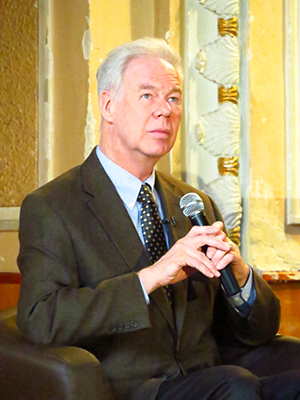 On the occasion of the Romanian visit, there have been three public events. On each event, the public was given the opportunity to watch excerpts from Doblmeier’s productions interspersed with conversations between the author and Adrian Bocaneanu: a key section from the film on Albert Schweitzer was followed by extensive portions from The Adventists and The Adventists II. The trailer of The Blueprint was also showed.

In Timisoara, the largest city of the West region of Romania, the meeting was held Friday night in one of the four Adventist churches. To a full church, Doblmeier, who is not an Adventist, wished all present a happy Sabbath. The AMiCUS Association student choir beautified the event.

On Saturday morning the venue of the meeting was the hall of the Culture Palace in Arad, with about 450 in attendance. An impressive number of public officials honored the event and gave very positive speeches in the end, among them the mayor of the city with a population of 160,000, the chair of the legislative body of the region, the president of one of the two state universities in the city. The very diverse religious life of the region of represented by a council member of the Romanian Orthodox Archbishopric, a local bishop of the Greek Catholic church and the president of the Jewish community. The meeting was followed by a visit to the other state university of the city, on the occasion of their yearly festival.

The last station of the trip was in Oradea, a city 200,000 and rich ethnic and religious diversity. The meeting was held in the concert hall of the local Philharmonic, which was also packed to capacity. Among the public officials who participated and gave speeches there were the prefect of the region, the chair of the legislative body of the region, the dean of the School of Medicine, who is also a member of the Romanian Senate, another member of the Romanian Parliament representing that district.

The administrators of the Banat Conference, covering that territory, and the local pastors in the three cities were very much involved in the preparation of the meetings. The participation of so many persons representing the local government, the Romanian Parliament, the academia and religious bodies reflects close connections and personal friendships which have been built over many years. The West region of Romania is well known for this spirit of mutual respect and brotherly spirit among religious denominations, either majority or minority, very old or rather recent.

Martin Doblmeier, who was also joined by his wife Jelena, a Serbian by birth, was very impressed with the warmth of the Adventist believers and of their friends, and also with the participation and the affirmative speeches of so many important public personalities. He is eager to return to Romania and visit other places, especially the capital Bucharest.