Geneva, Switzerland, June 10, 2014. [CD EUDNews; A. Mazza]. During the launch of the AIDLR special edition publication “Worldwide Human Rights and Religious Liberty - A New Equilibrium or new Challenges” of the book, Conscience and Liberty, a panel was organized on “Worldwide Human Rights, Religious Liberty and Religious Minorities: ‘Dialogue Five’ – Developing a Holistic Framework”. It took place on June 10th, at the United Nations headquarters in Geneva, Switzerland, at the 26th Session of the Human Rights Commission (HRC) and was sponsored by AIDLR and the permanent delegations at The Council of Europe and the Republic of Uruguay. 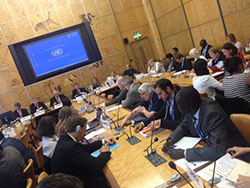 The panel brought together representatives from international, regional and national institutions proposing synergy between a network of relevant stakeholders –what AIDLR has named ‘Dialogue Five’ as a platform for the next Congress proposed by AIDLR to take place at the 28th Session of HRC on March 9-11, 2015.

The panel provided an opportunity for participants to share information on the International Conference hosted in Madrid on January 17, 2013 at the University of Complutense, with the participation of important guests representing UN, COE, EP, Government of Spain, religious, international scholars, diplomats and INGOs. According to Heiner Bielefeldt, Special Rapporteur on Freedom of Religion and Belief, the International Conference organized by AIDLR “sets an example”, that “we should copy”; “we should establish that on a regular basis in fact”. Why is it so important?

"We have human rights obligations at different levels: national, regional and international; and religious beliefs and human rights develop in different directions and can undermine each other. We have the UN approach, the EU approach, the COE approach, and various national approaches... as a matter of fact, these different institutions sometimes are worlds of their own,” so Heiner Bielefeldt.
"Coordination is needed between UN, EU, COE, OSCE, and other commissions and working groups at international, regional and national levels, and we need to discuss how all of these institutions and organizations can work together effectively."

Dr. Bruno Vertallier, President of AIDLR, highlighted the history of AIDLR (www.aidlr.org) and the founder and first secretary general, Dr. Jean Nussbaum, whom he met personally. "He was a champion for liberty. He has had a strong influence on me", said Bruno Vertallier.

Petre Roman, former Prime Minister of Romania, said: "I am very honored to be here and to support the presentation of this great book, that talks about dignity and love".

Mrs. Laura Dupuy Lassere, Ambassador and Permanent Representative of Uruguay to the United Nations in Geneva and former President of the Human Rights Council, focused on the Universal Declaration of Human Rights, fundamental rights that include freedom of speech and of conscience. "We have to prevent religious intolerance through education, professional training and prevention", said Mrs. Dupuy Lassere.

Dr. Harald Mueller, Judge in the tribunal of Hannover, highlighted on the Edict of Milan - the Edict of Tolerance and on the relations between state and religion. His speech was based on a more specific and juridical perspective. 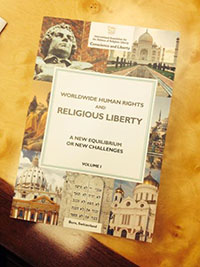 Prof. Jose-Miguel Serrano Ruiz Calderon, researcher and Professor at the Human Rights Institute of the Universidad Complutense of Madrid, gave a deeper insight into the social and cultural background of religious minorities.

Dr. Petru Dumitriu, Ambassador and Permanent Observer of the Council of Europe to the United Nations in Geneva, declared: "Religious Liberty is an existential condition for a peaceful society. It is a pillar of democracy. Therefore, we have to raise awareness among the people."

Mrs. Rita Izsak, special rapporteur of the United Nations on Minority Issues, said that "religious minorities should support their governments by promoting Religious Liberty. The focus of the institutions is very important."

Dr. Ricardo Garcia-Garcia, Deputy Director of the General Ministry of Justice in Spain, expert on religious minorities, focused on the Spanish system, that has become a model on an international level. It is based on equality, separation between state and religions, cooperation and human rights.

Dr. Ganoune Diop, representative of the International Religious Liberty Association (IRLA) to the United Nations in New York and Geneva, presented the pillars of the UN, that is Peace & Security, Justice & Development, Human Rights & Human Dignity.

Dr. Harry Kuhalampi, former advisor at the European Parliament, stated that "there is a lack of understanding and knowledge. We have to discover the deep meaning of religions. We should promote and enhance religious tolerance and dialogue." 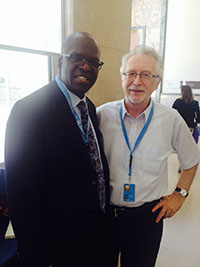 Prof. Heiner Bielefeldt, the UN special Rapporteur on Freedom of Religion and Belief, declared that "there is a need for a better collaboration and cooperation between civil society, state representatives and international bodies. We need to work together, to create a synergy and an efficient network. That is what AIDLR is doing in a excellent way!"

Dr. Liviu Olteanu, secretary general of AIDLR, concluded the debate inviting all participants "to be pioneers in Religious Freedom. Everybody needs to acknowledge his/her responsibility and to support this mission in a cooperative way."

The soon to be launched, AIDLR’s ‘Conscience and Liberty’ - Worldwide Human Rights and Religious Liberty - A New Equilibrium or New Challenges - Volume I, " is an important tool, and stresses that each actor and stakeholder is important and matters in promoting and defending peace, human rights and religious liberty for all people", stated Liviu Olteanu, AIDLR General Secretary.

The panel also included the extraordinary contribution of Dr. John Graz, secretary general of IRLA, the International Religious Liberty Association, and Dr. Gabriel Maurer, Vice-President of AIDLR. Corrado Cozzi, a member of the editorial committee of AIDLR commented: "We acknowledge once again the need to focus on education and training, especially for our children and for the younger generation."

The panel has established a platform for the next Congress proposed by AIDLR to take place at the 28th Session of HRC in Geneva on “Worldwide Human Rights and Religious Liberty” and has proposed suggestions that international, regional and national institutions can employ to protect and promote human rights and the principle of religious freedom and belief for all people.

Pictures: 1. The meeting room at the UN; 2. Bruno Vertallier, AIDLR President, and Liviu Olteanu, Secretary General of AIDLR; 3. The United Nations in Geneva; 4. The Flyer of the Event; 5. Ganoune Diop, representative of the International Religious Liberty Association (IRLA) to the United Nations in New York and Geneva, and John Graz, Secretary General of IRLA; (A. Mazza)