August 18, 2014 | Silver Spring, Maryland, United States | Andrew McChesney, Adventist Review
Seventh-day Adventist world church President Ted N. C. Wilson forcefully asserted that life has existed on the Earth for only a few thousand years, not millions of years, as he opened an educators conference in Utah on Friday, and he said teachers who believe otherwise should not call themselves Seventh-day Adventists or work in Church-operated schools.

Wilson spoke to a crowd of mainly teachers at the start of a 10-day international conference on the Bible and science in Las Vegas, Nevada, during the opening session of the conference, prior to traveling to St. George, Utah. The location was chosen for its easy access to three geological sites that the 350 participants will explore between conference sessions on archaeology, geology, paleontology and biology.
“As teachers on the campuses of Seventh-day Adventist academies, colleges and universities, and leaders in God’s church … hold firmly to a literal recent creation and absolutely reject theistic and general evolutionary theory,” Wilson said in his keynote speech. “I call on you to be champions of creation based on the Biblical account and reinforced so explicitly by the Spirit of Prophecy,” he said referring to the writings of Adventist Church co-founder Ellen G. White.

He pointed to Bible passages such as Genesis 1, 2 and Psalm 33:6, 9 and the writings of White to reject a popular teaching that each day in the biblical creation week might have lasted millions of years, thereby making the world much older than the 6,000-odd years that Creationists believe have passed since the Earth was formed.

The popular teaching, which mixes the biblical story with Darwin’s theory of evolution, has crept into some Adventist schools in recent years and prompted, in part, a decision by the Adventist Church to start organizing Bible and science conferences in 2002.
In his speech, Wilson quoted from White’s book Testimonies to Ministers and Gospel Workers: “When the Lord declares that He made the world in six days and rested on the seventh day, He means the day of 24 hours, which He has marked off by the rising and setting of the sun.”
“How much plainer could it get?” Wilson asked.

He said that the very name “Seventh-day Adventist” pointed to a literal six-day creation because it would make little sense to commemorate a seventh-day Sabbath if the original Sabbath had lasted for years instead of 24 hours.
“If one does not accept the recent six-day creation understanding, then that person is actually not a 'Seventh-day' Adventist since the seventh-day Sabbath would become absolutely meaningless historically and theologically and most of our Biblically based doctrines centered in Christ and His authoritative voice would become meaningless as well,” Wilson said. 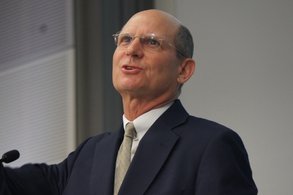 He cautioned against associating with scientists, humanists and “some who claim to be Seventh-day Adventists” who have embraced an evolution-based creation theory.
“Do not believe them nor participate in this manipulation of biblical truth regarding creation and the visible commemoration of creation—the Sabbath,” he told conference participants. “In essence, evolution is not a science.”

He said educators should support creationism from the heart or do “the honorable thing” and resign.
“It is that important to God’s ultimate mission,” he said.

Ed Zinke, an Adventist theologian, businessman and co-organizer of the conference, explained in an interview that the implications of misinterpreting the Bible could run deep and seriously harm a person’s relationship with God.
“A scriptural understanding of God makes it possible for us to have a closer relationship with Him than if we have a false concept of God,” Zinke said.

His remarks mirrored White’s writings about Cain and Abel, the first offspring in the Bible. White said that Cain and Abel both thought they were worshiping the same God with their sacrifices, but God rejected Cain’s sacrifice because Cain did not worship the true God.
While the Utah conference is rooted in the Bible, it is also about science and will include presentations with fossils, rock formations, and recent archaeological findings that King David’s name was carved on the entrance to city gates, offering scientific evidence that the Israelite king is more than a Bible story.

“It seemed impossible to prove even 50 years ago, but now they are finding that the Bible can be relied upon to guide you in archaeology,” Zinke said.
Conference participants, who include representatives of Adventist schools around the world as well as church leaders, scientists and a few doctoral students, will go on three field trips for a close-up look at evidence supporting the belief that the Earth is a relatively young 6,000 years old: to Virgin River Gorge, a long canyon located between St. George, Utah, and Littlefield, Arizona; the Grand Canyon in Arizona; and Utah’s Zion National Park, which has a 15-mile canyon plunging up to half a mile deep at some points.

Arthur V. Chadwick, a geologist and professor at Southwestern Adventist University, said scientists have to rely on faith no matter whether they support creation or evolution.
“As we evaluate the data, we see things that are problems for creationists and we see things that are problems for evolutionists,” he said by phone ahead of the conference. “No one can claim that they believe one more than the other because it is not transparent, it leaves the possibility of choice.”

Chadwick has devoted his entire career to finding scientific evidence that supports creationism and has published more than 50 research articles in mainstream journals. He was to present some of his latest findings at the conference.
Zinke, the co-organizer, said he hoped that educators would take the latest scientific research supporting the young Earth viewpoint from the conference and use it to strengthen their own faith and that of their students.

“We’re hoping to enrich teachers so that they’ll be well informed in the classroom and that they’ll understand the importance of portraying a biblical worldview to their students, helping them understand how that impacts various disciplines, including science, and how it impacts their personal lives and their commitment to God,” he said.