In delivering the announcement, Hope Channel board chair Pardon Mwansa expressed his confidence that “Gabriel will continue Hope Channel’s tradition of developing quality television programs that appeal to viewers, even a secular audience as they take their first steps toward God.”

Raised in Argentina and other South American countries, Begle’s educational pursuits include ministry, healthcare, and broadcast media. For the past three years Gabriel has produced one of Hope Channel’s flagship programs, “Go Healthy for Good!”. Though Begle pastored several churches, he has worked most of his career as a director of television production for ministries in North and South America. 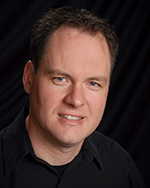 “We welcome Gabriel to his new responsibilities,” said Brad Thorp, President of Hope Channel, Inc. “With this level of skill and experience and having worked with media ministries around the world, Gabriel is just the right person to continue leading Hope Channel in its quest to become the premiere Christian television network.”

Begle described his vision for Hope Channel’s future as one of telling stories to help people find a connection with God. “Modern TV is all about stories, and we’ll work diligently to make Hope Channel the best storyteller in Christian media,” he said. “It’s about making a connection with a world of people who are looking to God for a better life.”