Oslo, Norway [Tor Tjeransen, tedNEWS, CD EUDnews], October 1, 2014. From 9-11 September 2014, religious leaders from Russia and Ukraine gathered in Oslo for dialogue to agree on a common communiqué regarding the situation in eastern Ukraine. Given the different perspectives of the two delegations, that was not the most likely outcome. Adventist leaders played important roles in the interreligious dialogue.

In the one-page long final communiqué the religious leaders support the efforts of the two countries and the “international community directed toward termination of the bloodshed and establishment of peace in Ukraine”. Further, the communiqué appeals “to all participants of the conflict not to allow, under any circumstances, actions that would lead to humiliation of human dignity, use of torture, kidnapping (including those for the sake of ransom) and looting”. 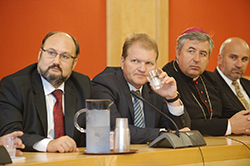 Religious freedom is another concern of the religious leaders for Ukraine and Russia. In the communiqué they state: “As religious leaders we want to pay special attention to this need to ensure the freedom of religion in the war zone”. Participants in the roundtable conference told of gross violations of human rights. Believers in Eastern Ukraine have been picked at random by rebel forces only to be killed and dismembered. During the conflict many houses of worship have been totally destroyed.

The religious leaders present at the conference included Orthodox, Pentecostals, Adventists, Baptists, Methodists, Jews and Muslims. They all condemn “violence committed toward clergy and lay people, religious buildings and houses of prayer of any denomination”.

picture: participants of the interreligious dialogue on the situation in eastern Ukraine (photo: Tor Tjeransen)