Dr. Herbert Josef Stoeger passed away in Evergreen, Colorado, on September 24. He was a well-loved and talented friend, father, grandfather, great-grandfather and husband, with an abiding desire to help people with their personal and collective problems. He was a man with a ready and contagious smile, who valued placing his gifts, which he continued to hone and polish, into the service of the church for many years.

Herbert was a deep thinker, who took pleasure in discussing philosophy and Christian thought with those around him. He will be deeply missed by many who remember him fondly.

Herbert was born on September 18, 1925 in Bruck an der Mur, a small town in the Austrian state of Styria, as the oldest of five children. During the time of the Great Depression, his father lost his job with the Austrian railway, upon which the family faced enormous economic challenges.

On the eve of World War II, when Herbert was barely 14-years old, the family’s pain was exacerbated by his father’s untimely death of cancer. In the following years, Herbert managed to complete his Matura, and commenced his university studies in medicine. However, shortly thereafter, he would be drafted into the German Luftwaffe as a pilot.

At the end of WW II in 1945, he was ordered to the epic Battle of Berlin, which he survived, and after which he became a prisoner of war - initially with the Russians and later with the US Forces. Fortunately, the Allies allowed an early liberation of some young Austrians, who had not been involved in Hitler’s Anschluss. Herbert, who was among them, could return home in October of 1945.

Personal and family finances mandated that Herbert immediately find work, which he did in taking on the role of a waffle-baker - working from pre-dawn hours until noon each day. Since classes for medical school, his original major, were scheduled in the mornings, he switched to the more convenient afternoon hours and course work in Clinical Psychology. He graduated with distinction with a PhD in Clinical Psychology from the University of Graz, having been taught by several world-renowned professors. Immediately following the completion of his studies, Herbert wanted to emigrate to Canada with two cousins and a friend, but was denied a visa for health reasons. 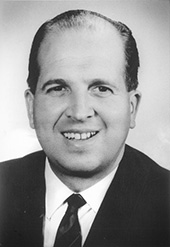 Hearing that Herbert was not yet employed, the director at Seminar Schloss Bogenhofen called him to join their faculty to teach natural sciences and subsequently classes in other disciplines. Thus began his long and close relationship with the seminary, enduring until 1961, with the exception of the academic year 1953-54, during which he taught at Collonges-sous-Salève, France. During his tenure of teaching at Bogenhofen, he was also promoted to the position of director of the school (1957), with the distinction of being the youngest person, at age 32, to hold this position in the school’s history.

Herbert’s influence was far-reaching, and the impact he left on students and fellow faculty - profound. He was the first to engage the institution with the Goethe Institute, to collaborate, to standardize and to help accredit German language study for foreign students at Bogenhofen. By these efforts, Herbert also participated in formalizing the platform for modern language study as part of the ACA programs. BOGI-Zeitung will devote a detailed article to him in its next issue.

Herbert met his future wife, Edelgard Sommer, in 1951 at the international SDA youth congress in Paris, France. After a humor-filled courtship, conducted via correspondence, Edelgard accepted his proposal of marriage, and they were married in Bogenhofen in 1953. They were blessed with the births of a daughter, Gabriele, in 1956, and two sons, Wilfried (1958) and Reinhard (1962).

In 1961, Herbert was invited to teach German at Pacific Union College (PUC) in California, with the family moving across the Atlantic for the first time. His limited knowledge of English brought forth his creativity and he became known as a humorous and gifted teacher, cartooning on the blackboard even for the beginner students, who learned faster this way than through traditional instruction. A master communicator, he would continue to demonstrate such ingenuity and creativity throughout his multi-faceted career.

By 1963, the Southern European Division called him to its headquarters in Bern, Switzerland, to take on the role of MV Secretary (today’s title: Youth Director). In 1966, he took on the added responsibilities as Medical Department Secretary for the SE Division. In 1970, a peripatetic Herbert, once again crossed the Atlantic, back to California, to chair the Behavioral Science Dept. at PUC, continuing with his successful tenure as an admired, beloved teacher and inspiring mentor to many students.

In 1972, Herbert returned to Bern, to the newly named Euro-Africa Division, as head of the Health and Temperance Department, a position he kept until his retirement in 1990. During this season of his career, he helped in the development of ADRA, demonstrating his excellent fund-raising abilities across Europe, and working with governments to raise funds for regions facing food shortages and other challenges in low-resource settings of Africa and Eastern Europe. He also worked with the WHO in Geneva and became director of ICPA, the International Commission for the Prevention of Alcoholism.

In addition to the aforementioned roles, Herbert was an ordained minister, a captivating storyteller, an exemplary orator, and a translator - much in demand at important meetings. From 1975 onward, he had the pleasure of collaborating with Elder Edwin Ludescher, his brother-in-law, who had been elected President of the Division.

Herbert entered retirement in 1990 and decided with Edelgard to move to Colorado to be closer to their daughter and family. They enjoyed designing and building a lovely home in Bailey. Herbert had great pleasure in taking care of their rural, alpine property with its large vegetable garden, field of potatoes, and spending time with his grandchildren. But his health problems and increasing frailty compelled them to move to Morrison in 2001, to be closer to medical and other services. 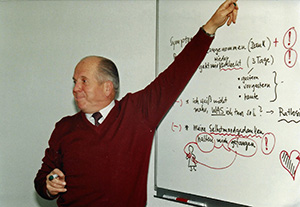 Edelgard spent the greater part of the past two decades giving expert care to Herbert through her deep knowledge of nutrition and physical therapy. This year, at the end of August, Herbert’s strength declined and it became apparent that he just wanted to be at rest. The Lord allowed him to pass away with peace in heart and spirit, surrounded by family, including two great-granddaughters, who sang for him, and the family reminisced with him about the stories he used to tell them.

A Memorial Service was held on October 5 at the Aspen Park Church in Conifer, Colorado. A beautiful slide show commemorating his life was shown during the ceremony. Probably the most touching moment was to see and hear his five-year old great-granddaughter Nadia sing Beethoven’s “Ode to Joy”, as a fitting epitaph to his rich life. The service was broadcast through Livestream. Family members and friends followed the program on three continents. One family member pointed out that Herbert “spent so much of his life bringing people from around the world together, that it was rewarding to think he could do it once again.” Interment will follow at a later date, with immediate family only, in the town of his birth, Bruck an der Mur, Austria.

Thirty years ago, Herbert lived to tell about his spectacular, miraculous and life-changing experience of February 9, 1984, where he could have died on one of his mission trips to Africa, when a missile hit the passenger plane he was traveling on shortly after taking off in Huambo, Angola. Shot down by guerilla fighters during Angola’s harsh civil war, he thought that his last moment on earth had come, but he survived – unscathed! He made good use of this additional time in his life. He sleeps peacefully now, until such promised time when “the dead in Christ will rise first” (1 Thessalonians 4:16). May we be there, to witness his resurrection, on our way to meet our blessed Savior!

The slide show of Herbert’s life may be viewed here. If the first website is blocked (as it may be the case in some countries), there is this one, which requires registration - click here.

3. Herbert Stoeger in a favorite role.

4. The plane which was hit by a missile in Angola.