“This building is not as important as the work to be done therein... it represents the Seventh-day Adventist Church in Spain”.

These are some of the words spoken by Pastor Jesús Calvo, president of the Spanish Seventh-day Adventist Union, during the interview by HopeMedia right after the inauguration ceremony of the new headquarters in Spain.

Others present were the director of the Spanish Bible Society and president of the FEREDE (Federation of Religious and Evangelical Entities in Spain), Pr. José Luis Andavert. Pastor Manuel Cerezo, executive secretary of the Evangelical Council of Madrid (CEM) and Dr. Pedro Tarquis from 'Protestante Digital', one of the most important worldwide Spanish protestant newspapers on-line.

Pr. Andavert showed his appreciation towards the Adventists, and praised the work done in Spain by the Seventh-day Adventist Church, benefiting Spanish society for many years. “We have been collaborating with the SDA Church for many decades, and I am thankful for the work you do in spreading the Word of God”, said Andavert.

In his speech, Dr. García expressed appreciation towards the Adventist Church and all the services offered to the Spanish community, contributing by promoting values, health programs, charities, and much more. “When I visit other countries I am proud to say I am a friend of the Adventists in Spain”, said Dr. García. “Using your good values and behaviour, you contribute to the 'Spain' we are proud of”, he continued.

All guests were collaborators with the Adventist Church in Spain, from different denominations, bureaus and authorities. They were all welcomed with a video summarizing the history of the Seventh Day Adventist Church in this country, as well as a report with some statistics of the Church, local and worldwide.

The new facilities, located in Pozuelo de Alarcón, near the city of Madrid, were fashioned by the latest design, saving energy, reducing greenhouse gases, and decreasing maintenance expenses. 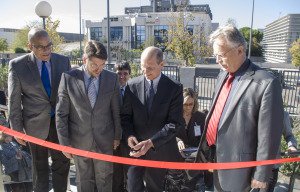 Pastor Ted N.C. Wilson in his main speech, thanked the authorities for being available by their presence and good relations with the Seventh-day Adventist Church in Spain as well as the work done to promote Religious Freedom in this country. “Seventh-day Adventists should be the best citizens”, said Pastor Wilson to the authorities, “and if they are not, please let me know!” he added, followed by some chuckles.

Pastor Wilson affirmed: “The relationship with God is something that should distinguish Seventh-day Adventists, with a relationship that transforms people”. Regarding the new offices, he added: “This new building is only a tool to continue working for people”, alluding to the verse found in Acts 4:29. Referring to the early rain in the upper room, “the whole building trembled when the Holy Spirit filled the room and the people in it”, said Wilson. “It is my wish that these new Seventh-day Adventist Church headquarters in Spain may also be filled with the Holy Spirit and be shaken spiritually to fulfill the mission of Jesus towards humanity in all possible dimensions: physically, mentally, socially and spiritually, continuing with His ministry until Jesus returns”, he added.

“Christ revolutionized society in His day, and the Seventh-day Adventist Church is called to do the same today. This new facility is not only a building, but a place where people love and serve society reflecting what Jesus did, people who have the three angels' message and faithfully fulfill the ministry of the Lord”, declared Pastor Wilson.