Gianfranco Rossi, a pastor of the Seventh-day Adventist Church and former secretary of the AIDLR (Association International pour la Defense de la Liberté Religieuse) passed away and the funeral took place  February 16, at the Adventist Church of Lugano (Switzerland) where he lived with his wife, Carmela.

The funeral message was presented by Pastor Giuseppe Cupertino, Stewardship Ministry director of the Italian Adventist Church and a long-time friend of the Rossi family. 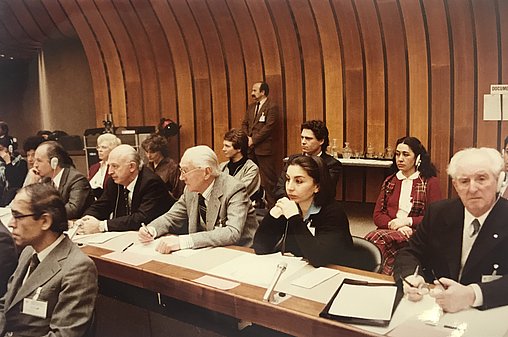 In his message, Pastor Cupertino recalled how Pastor Rossi was inspired by the words of the wise King Solomon who wrote in the conclusion of Proverbs (31:8, 9): "Speak up for those who cannot speak for themselves, for the rights of all who are dismissed. Speak up and judge fairly; defend the rights of the poor and needy. " And that's what Gianfranco Rossi continually did throughout his life.

He died at the ripe old age of 95. He was born in Berzio (Lecco) on November 15, 1924, in a Catholic family.  After completing a degree in mathematics and physics, obtained at the University of Florence in 1953, he discovered the Adventist Church while attending the Adventist Institute of Biblical Culture. After having been a tutor and teacher at the Institute for some time, in June 1954, he was called to Rome by the Italian Adventist Union to take up the post of director at the Department of Public Affairs and Religious Liberty. 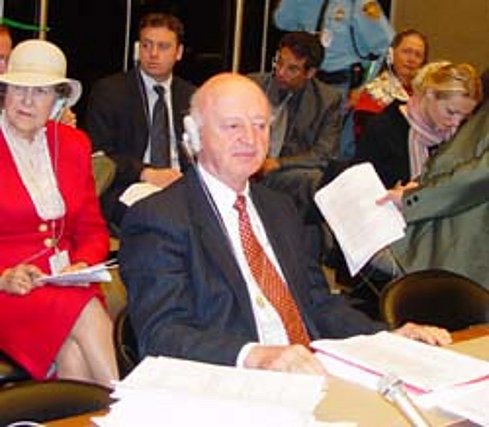 He was well-known in the diplomatic world, above all for his faithful and unconditional advocacy of human rights in the area of freedom of conscience.
"The Italian Adventist Church will always remember him with great affection and immense esteem, since he can be said to have been the best-known Adventist in the public sphere of the Republican era," says Davide Romano, Italian Adventist University in Florence principal and Public Affair and Religious Liberty (PARL) director.

Gianfranco Rossi has in fact spent his entire long life fighting for the full affirmation of religious freedom and conscience in Italy and, later, in Geneva, where he cooperated for a long time with the United Nations (UN) and also for several African countries.

In 1982 he was called to head the Department of Religious Freedom of the Inter-European Division in Bern, thus also becoming Secretary of the AIDLR. This position he held until 1995.

Gianfranco Rossi understood, better and more than others, that to promote the right to religious freedom and conscience, it was necessary to build fruitful and cordial relations with representatives of other religious and civil institutions. Together with Bert B. Beach, then PARL director of the world Adventist Church, he participated as an observer in the sessions of the Second Vatican Council.

On that very occasion, he developed an intense friendship also with Monsignor Pietro Pavan, who was then the most trusted collaborator and consultant of Pope John XXIII.

Gianfranco Rossi also had an intense and close relationship with representatives of the other evangelical churches and with authoritative exponents of Italian legal culture, such as the eminent Waldensian jurist, Giorgio Peyrot, and Dr. Jean Nussbaum, founder of AIDLR. 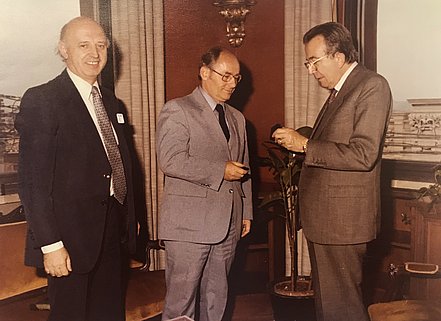 Gianfranco Rossi was very active in the extended preparation of suitable political conditions for the development of the path that would later result in the signing of the agreement between the Italian Adventist Church and the Italian State. His contacts with the minister and then president Giulio Andreotti, among others, are documented and continuous over the almost twenty years spanning 1959-1977.

"He always maintained, however, the humility of recognizing himself a small instrument in the hands of the Lord. And we have a duty not to forget his lecture," says Davide Romano.

Gianfranco Rossi, on his frequent visits to government officials, was often accompanied by his wife, Carmela, with whom he shared his occupation as ambassador of the right to freely affirm his profession of faith. Mrs. Rossi remembers, with great affection, having faithfully supported her husband in all his battles and, surely, she was also a valid counselor for him.

Mario Brito, Inter-European Region (EUD) president, and current AIDLR president, remember Gianfranco Rossi saying, “He was a man of vision, a religious liberty ambassador with exceptional relational skills. He enormously contributed to the ongoing construction and establishment of the cause of religious liberty in Italy and Europe. He built several bridges of understanding, connecting communities and individuals. He has greatly fostered AIDLR dialogue with state and church authorities.” 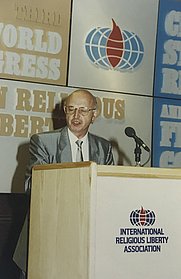 Berth Beach, former PARL director at the General Conference and close associate of Rossi, said that: “I would consider Gianfranco Rossi as the outstanding religious liberty director in the history of our church.  I used him greatly in my work.  He had one advantage over us, in that he spent all his life in the religious liberty field, while some of us loved religious liberty but were involved in general church administration.
He had a great gift in contacting top government officials, including popes and heads of state.  I think we had the privilege to learn from each other and thus increase our religious liberty experience.”

Ulrich Frikart, former EUD president at the time when Gianfranco Rossi was in charge, said: “I will remember Brother Rossi as an intelligent, capable, and kind man with an open and positive vision of the Church and its mission. I consider it a great privilege to have been able to collaborate with him for several years. My prayers go out to his wife and family.”

Liviu Olteanu, current AIDLR secretary and PARL director at EUD, expressed deep respect for what Gianfranco Rossi did in favour of the defence of religious liberty and freedom of conscience, not only in benefit to the Adventist Church’s EUD and its members, but also for all people, at the highest levels.
“Gianfranco Rossi, together with Dr. Jean Nussbaum, the founder of the AIDLR, influenced all the later directors until now, with his professional contribution to ‘public affairs’ and also his deep support, energy, and contribution to ‘religious liberty’ at both regional and international levels,” expressed Liviu Olteano. 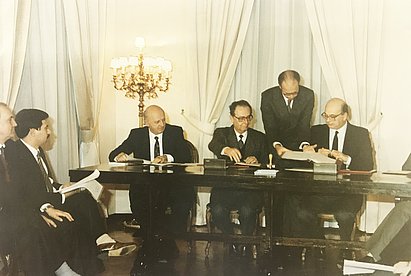 Gianfranco Rossi travelled worldwide to international conferences and official meetings where he was received in audiences as the respected ambassador of the “International Association for the Defence of Religious Liberty”. Through this organization, Rossi also met statesmen, ministers, the highest-ranking religious leaders, and representatives of all religions and churches, and he met many other key players from all over the world.

“We may pay tribute to Gianfranco Rossi regarding his deep commitment to developing many international resolutions, documents, and declarations. I would especially like to mention the ‘United Nations Declaration on the Elimination of All Forms of Intolerance and of Discrimination Based on Religion or Belief’, for his courageous and constant work, negotiating with the main figures of the world,” Olteanu said.

Rossi worked tirelessly to include in the UN Declaration, the paragraph “h” that he proposed, the Sabbath of the Seventh-day Adventists. Rossi fought for the expression “days of rest” to be included in the UN Declaration, and finally, praise the Lord, he got it. The article 6 of this Declaration starts: “In accordance with article 1 of the present Declaration, and subject to the provisions of article 1, paragraph 3, the right to freedom of thought, conscience, religion or belief shall include, inter alia , the following freedoms:  (h) To observe days of rest and to celebrate holidays and ceremonies in accordance with the precepts of one's religion or belief."

Gianfranco Rossi, by working at the highest levels, together with policy-makers and international figures, as an advocate for freedom, religious freedom, and freedom of conscience and human rights for all people, gave life to one of most important and highest strategic missions of the Adventist Church. “It remains, and continues to be, an urgent priority and a deep responsibility for all of us to meet society’s influential figures, and concretely defend the principle of religious freedom for all people”, Olteanu stated, concluding, “May God support the Rossi family and the Adventist Church, remembering this courageous pioneer who made the difference for the benefit of Adventist Church and for humanity. May God bless the Rossi family and the Adventist Church, and also all people for whom Rossi’s influential work opened so many doors to the understanding of respecting the differences of others and religious liberty.”

John Graz, former worldwide PARL director, presenting his condolences at the funeral, addressed his message directly to Mme. Rossi, the daughters, and the rest of the family, saying how much he appreciated seeing the wife and husband acting as a team. 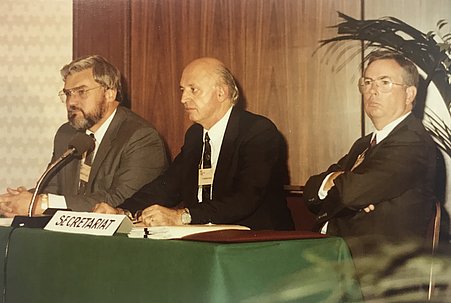 In his message, Graz also shared the condolences of Pastor Ted Wilson, the worldwide Adventist President, assuring attendees of his prayer for Mrs Rossi and the whole family. Pastor Wilson had a high esteem for Pastor Rossi, for the quality image of the Church he had been able to give, even in the diplomatic field.

Graz reminded listeners of how passionately and responsibly Gianfranco Rossi intervened at the Human Rights Commission in Geneva. His interventions were always aimed at respectfully denouncing the abuses perpetrated in countries where freedom of conscience was shamelessly trampled upon. His speeches were echoed by the total silence of those present, mostly representatives of governments throughout the world.
His advocacy has allowed many solutions in the area of religious freedom and respect for human rights in various countries.

"Dear Sister Rossi, with your husband, you have had an intense life," Graz concluded his greeting. "You have chosen to dedicate it to fundamental human values such as freedom, justice and peace.  You have done so out of conviction and for the love of your neighbor. And in doing so, you have given life to the invitation of Jesus who said: do to others what you want to be done to you.”

Our condolences go to his wife, Carmela Rossi Giorgini, and his daughters: Daniela, Sara, and Rosella, with the certainty that, all together, we will see each other again in a time and place where his battles will no longer be necessary.
Messages of condolences can be sent to the email: rossirosae@gmail.com