ADRA Dunkirk, a local branch of ADRA France was founded in January 2012. Knowing the increasing number of refugees in its region, the team got in touch with Doctors of the world and other local associations, asking “how can we help?” Unlike the other days of the week, no organization was distributing food to refugees on Sunday. Right away, ADRA committed to address this lack.

Despite de reluctance of the French governement, the city of Grande-Synthe (near Dunkirk) and non-governmental organizations such as Doctors without borders opened an humanitarian camp for refugees on March 7, 2016. There, the ADRA team worked in partnership with many other associations to improve the living conditions of the exiled. Unfortunately, this camp burned in April 2017. Ever since in Grande-Synthe, numerous wild settlements remain and offer nothing but an uncertain future to migrants. These places are often referred to as “camps” or “jungle” and pointed out for their inhuman living conditions.

“We were a small Adventist community in Dunkerque, but we decided to take action and set up a local branch", remembered Claudette Hannebicque, head of ADRA Dunkirk. “We organized the first meeting, and we realized that immediate action was needed. The first Sunday, we brought them tea and home-baked dishes, we did the same on the second Sunday and soon we felt that what they really needed was a complete hot meal (it was winter). We had no finances but it didn’t stop us; we decided to act anyway and to provide ourselves the food supplies necessary for meal preparations the whole year. We then organized fairs and flea markets to fundraise in order to continue our work. An application for a grant was also made to the City Council of Grande-Synthe where the camp was located. The application was successful and until today, this grant allows us to buy most of our food supplies. When it comes to cooking gears, reparations of our van or distribution equipment, we rely on donations”, concluded Claudette Hannebicque.

For years, ADRA Dunkirk’s job has been to distribute food, clothes and hygiene products to refugees.

Unfortunately, over the years, the presence on a long term of exiles near the northern French coast became an issue of public order. If the civil society was commiting to improve the living conditions of the refugees, locals started to look unfavourably at the settlements. At the same time, the government and local authorities launched systematic dismantlings, pursuing a policy of non-fixation of these undesired population. Thus, over the years, the exiles have been parked, relocated, dismantled, or have setteled by themselves in various places. For the distributions ADRA goes and meet them where they are, that is to say most often near the A16 motorway to Calais (and England). Over the past three years, refugees have occupied different locations, in particular the Puythouck Woods. Refugees have been sheltered in and around a sport hall irregular camps were set up in a disused warehouse, on the edge of the motorway, near a freight station and under the bridge of the A16.

Nearly twenty associations operate within an inter-association group to best meet the needs of the exiles in the Dunkirk area. A water point has been set up by the town hall and dry toilets, though not very suitable for their culture, have been installed but are now out of use. Twice a week, an association runs the opening of showers for the exiles, but only men are accepted (2x 2 hours per week so not enough). There is nothing for women, children or minors.

The distributions are carried out by different associations, including ADRA. “We take care of breakfast on Thursday morning and cook a hot meal on Sunday lunchtime”, explained Claudette Hannebicque. “In addition to this, we regularly distribute clothes and hygiene products. Very recently, we’ve had rather generous donations considering the cold weather, the situation in the camp and the successive dismantlings. But new refugees keep on arriving. Shoes and warm clothes, for example, are extremely important pieces of equipment that we always need”.

ADRA has also put a generator at their disposal so that refugees can recharge their phones, the only way to keep in touch with their loved ones. 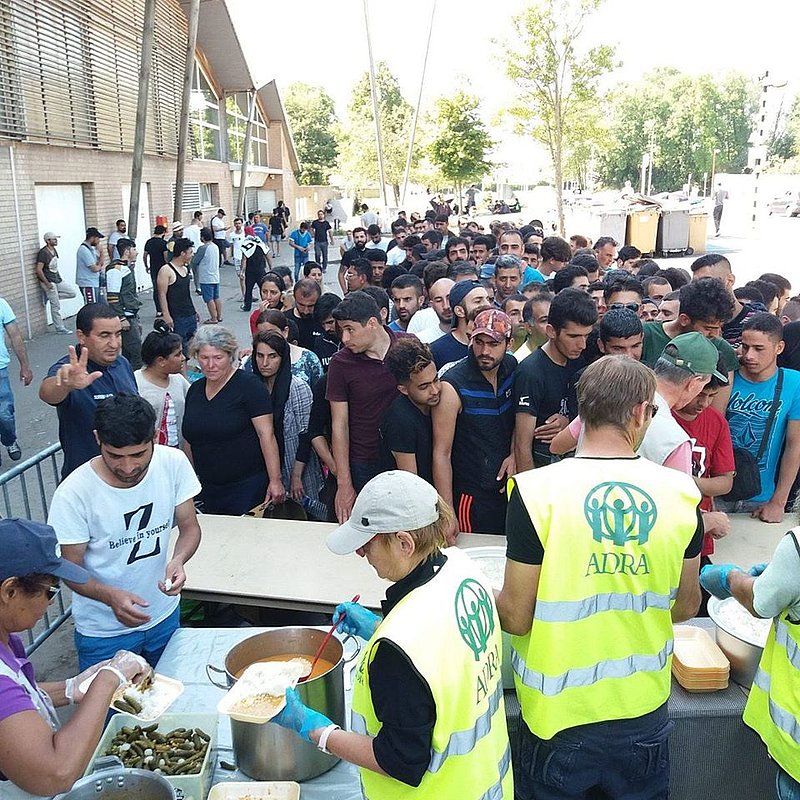 The team is an heterogeneous and cosmopolitan one. Volunteers come from various backgrounds: students, church members, active or retired people, asylum seekers from Africa, the Middle East or Eastern Europe. Very few of them are Christians, and all happily commit to help the exiles: sorting of clothes, distribution, cooking, washing up etc.

In the region, the passages to England are either hidden in lorries or on board makeshift boats in order to cross the Channel. As border controls are increasingly strict, many exiles choose to cross the Channel, which proves to be a very dangerous operation (currents, waves, engine damage, overloaded boats, risk of collision with large container ships). Many refugees get injured or even die.

The situation is not going to get any better as long as the government refuses to establish official refugee camps on the whole coast. The refugees are still in a wood under tents and tarpaulins, in the cold, the mud, the rain. They live in inhuman conditions.

There are around 400 refugees in the area of Dunkirk, or even more. There are also families with young children, but it is difficult to estimate them because there are several small camps which are dismantled twice a week. Refugees are often brought to the CAO (Reception and Orientation Centre) very far from the coast, but they are often coming back one, two or three days later, since they don't want to be far away. Finally, it's easier for them to try a passage to England.

The port of Calais is highly secured which results in refugees leaving directly from the neighbouring beaches with smaller -unappropriated- water crafts. The conditions of passage through the Channel mentioned earlier, make it extremely dangerous to cross on small loaded boats. “A few months ago, a whole family (a young couple and their 3 children) drowned while trying to cross the Channel”, said Claudette Hannebicque. “They are not afraid to take risks, they are so close to the English coast compared to the long migratory journey they have had to get here." 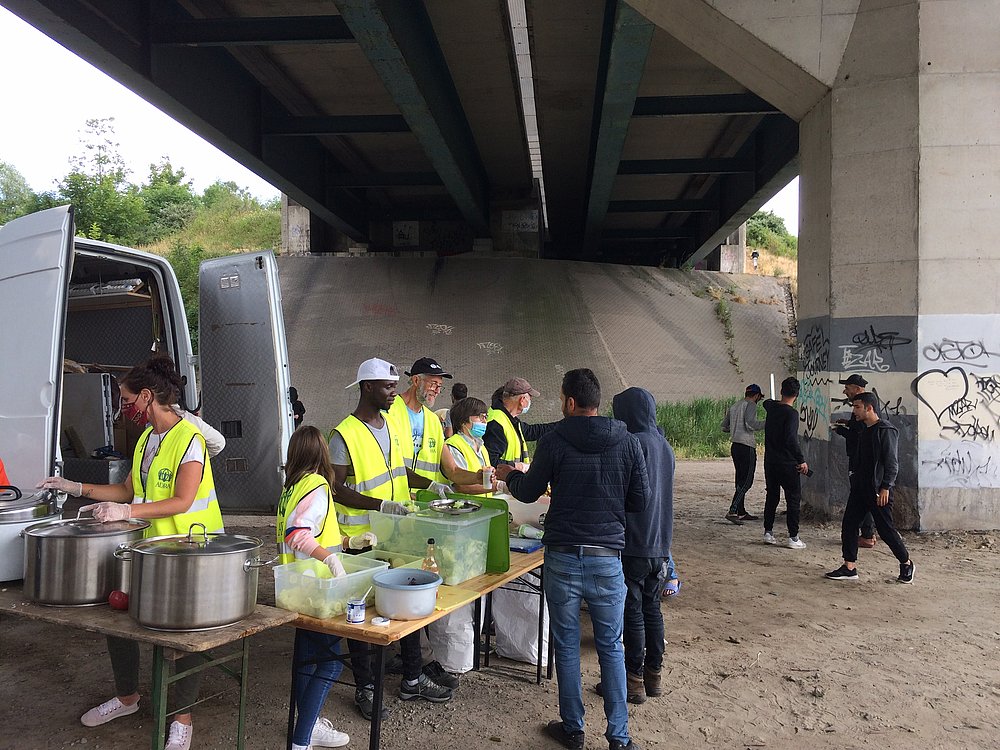 Concerning the pandemic, Doctors of the World and the Red Cross, both present twice a week on the settlements, make transfers to the hospital when there are suspicions of covid cases. There have been a few cases but there is no explosion of contaminations, as many feared at the beginning of the pandemic.

“Volunteers are trying to keep some distance, which is not always easy, and wearing masks of course”, commented Claudette Hannebicque. “We feel really helpless, we know that one day God will put an end to all this suffering.”

To donate please go to the website of ADRA France, where you can choose to support directly the local branch of Dunkerque (My details > Je souhaite soutenir > Antenne Dunkerque).