On Monday, April 19, 2021, GAIN 2021 commenced. This year, the event is taking place online due to the current pandemic. Approximately 100 participants are present, including professionals, leaders and workers within the industry, most of whom are from Europe, with some representatives from Asia, Africa, and the Americas. GAIN 2021 was organized by the two European divisions of the Seventh-day Adventist Church: the Inter-European Division (EUD) and the Trans-European Division (TED), overseen by the two Directors of Communication, respectively, Corrado Cozzi (EUD) and Victor Hulbert (TED), and HopeMedia Europe, managed by Klaus Popa.

Thus began the official launch of the Global Adventist Innovation Network 2021. In an age defined as “the Digital Age”, the use of technology and media is becoming increasingly important, even at a spiritual and religious level. “We are digital ambassadors of Jesus Christ,” affirmed Tor Tjeransen, Director of Communications for the Adventist Church in Norway, during his meditation. “We pay attention to the words we write and profess, because it is our duty to speak as Jesus spoke. People should see Jesus in us,” continued Tjeransen, concluding, “There are three keys to Christian communication: truth, kindness, and timeliness.”

In his brief introductory video, Victor Hulbert, Director of Communications for the TED—who was absent for health reasons—underlined the importance of “spreading hope and peace through our communication.”

The proceedings also included some touching testimonies by some Adventist communicators who were/had been sick with COVID-19 and/or cancer. They all testified that they had experienced a period of intense and deep faith, which helped them to increase their awareness and mature spiritually. “Periods of trial are opportunities for growth.”

Among the Adventist communication workers are remarkable professionals who have greatly contributed to the Church in the recent decades. Hence the General Conference wanted to confer, through its European divisions (EUD and TED), a special prize to Stephan Brass – current Director of Communications for the German Union – and to Tor Tjeransen – current Director of Communications for the Norwegian Union. Both are friends and both studied Theology, together, in Germany, at the Marienhöhe, in the 70s. Brass was one of the pioneers in digital evangelism in Germany, while Tjeransen led the Adventist Church in Norway for many years as president, focusing on media and communications. The World Director of Communications for the Adventist Church, Williams Costa, virtually awarded the prize to the two colleagues, underlining the fact that “the Church will always need the advice and contributions of professionals like Brass and Tjeransen”. At the end of the prize consignment, Brass thanked all his colleagues: “Without their help, I would not have been able to do anything”, while Tjeransen put forth a strong and clear message to all those present: “Use all the means of communication possible to share the most important news, Jesus’ return!”

The meeting continued with the keynote speech by Costin Iordache, Vice President of Public Relations of AdventistHealth, the healthcare structure of the Adventist Church in the USA. Iordache reminded us that in this new digital age within which we are operating, we need to consider 4 fundamental aspects that rule the digital world: speed, brevity, exchange, and transparency. The digital world has made everything quick, brief, open, and radical. These “coins”, however, have two sides, that is, strengths and weaknesses. If it is true that communication has become more open, accessible and available to all, it is also true that there is an informational overload that makes 90% of the information superfluous, superficial, false, and useless. Furthermore, this new method of communication favours conflict, the radicalisation of opinions, and confusion. Iordache’s concluding advice? “Slow down and favour depth and truth. Concentrate on quality rather than quantity.”

The assembly then divided into 5 different workshops, each of which focused on various aspects of digital communication.

In conclusion of the event, HopeMedia Europe, represented by its project manager Adrian Duré, presented an overview of projects implemented in the last few years. He especially focused on the project ‘Uncertainty’, which is in constant evolution and which has also seen the release of a book during GAiN, via its editor, Norel Jacob. ‘Uncertainty’ explores the most common feeling globally shared in our world today: uncertainty. The project explores the feeling of uncertainty, it scrutinizes it, and it offers a spiritual escape route. ‘Uncertainty’ is a leading multimedia project of the Adventist World Church, born in Europe, expressed in video productions, film, and other digital and print media that have earned great success even in the world of “secular” communication. The project is not yet concluded, and the production of other material continues.

“The first day of GAiN was a veritable success,” affirmed Corrado Cozzi, Director of EUD Communications and co-organiser of the event. “I want to thank everyone for their collaboration and participation. This event will be a true blessing for the Church’s activities in this digital age.” 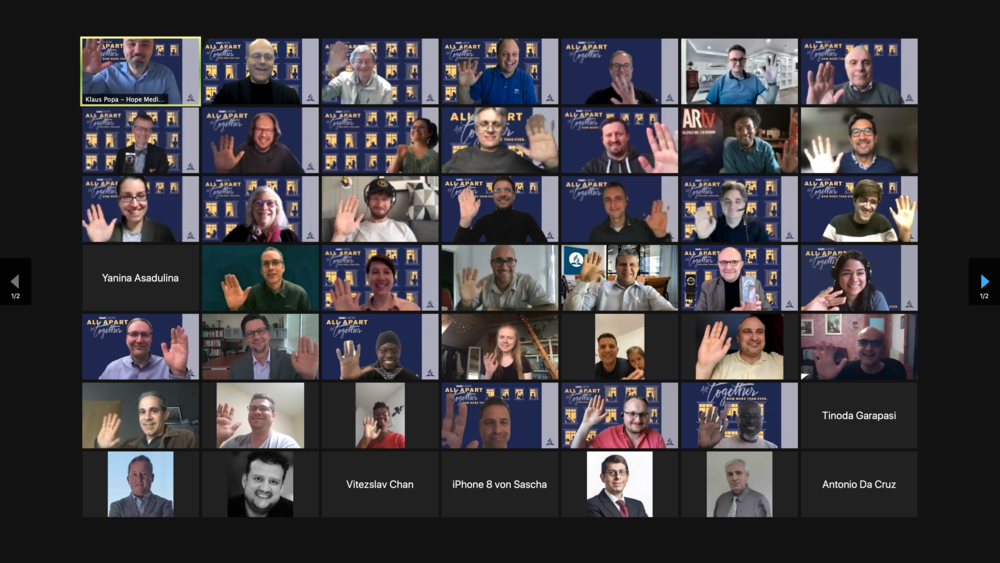 GAiN Europe 2021, is an event organised by the Communications Department of the Inter-European and Trans-European Divisions, in cooperation with Hope Media Europe and the contribution of Hope Channel and Hope Media from different countries of the Adventist world.
GAiN Europe, the Global Adventist Internet Network European section, is a community of communicators, technicians, and media professionals.

One of the purposes of Seventh-day Adventism, the movement that inspires and supports GAiN events, is to prioritise the way to accomplish the mission entrusted by Jesus 2,000 years ago.
GAiN Europe takes up this challenge and organises events focusing on the digital world in order to be where people are today: the Internet.