The journalism training course for communicators working in the Inter-European region took place - online - yesterday, June 16. With 45 participants - mostly from Italy, Germany, and Romania - the course was a great success, according to organizers. The course was created to provide all communications workers of the Adventist Church, in the Inter-European territory, with the tools to work with great professionalism in their ministry.

The speaker, Costin Jordache, serves as vice president of Public Relations and Marketing for Adventist HealthCare, a healthcare system operating in Maryland and Washington DC. Over the last 20 years, he has served in multiple roles, including news editor for the Adventist Review and Adventist World magazines. Costin holds a master’s degree in Radio, Television & Film and an MBA. He specializes in strategic media and communication leadership, public relations, teaching, and organizational leadership.

The online meeting was introduced by Corrado Cozzi, former director of communications at the Inter-European Division (EUD) and organizer of the training seminar. Cozzi gave a warm welcome to all participants and thanked Costin for accepting the invitation. Then, Cozzi handed the program over to Paulo Macedo, the newly appointed director of communications at the EUD, who, after a brief introduction, started the course.

Jordache dedicated the first part of the course to specifying the difference between public relations and journalism, both of which are important within society and to the health of an organization.

“Often,” explained Jordache, “there is no clear distinction between the two disciplines, and this creates confusion and lack of credibility. Journalism is not concerned with ‘making a good impression’. Journalism is concerned with communicating accurate facts and assisting communities and audiences in making sense of them.” He continued: “Good journalism independently shares the facts, without personal commentary by the journalist. The often-triumphalist tones associated with public relations writing can negatively impact the credibility of an organization if that style of writing is substituted for journalism. The goal is to be as objective as possible when developing a journalistic story.”

Then, Jordache went on to describe, in detail, the various types of journalistic writing and their function. 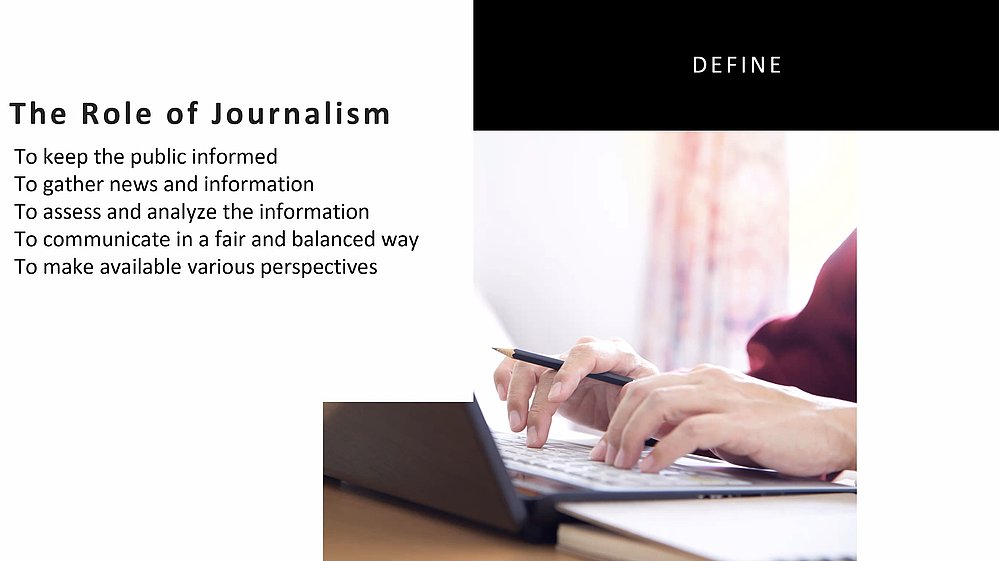 An interesting aspect was the section dedicated to 'democratized journalism'. “Smartphones, coupled with global Internet access and social platforms, have turned everyone into a potential ‘journalist’,” acknowledged Jordache.

The advantages are that  there are  more “eyes and ears” in the field, the availability of grass-roots perspectives and opinions shared about a topic or news event, and the possibility for better and deeper engagement between news organizations and their audiences. On the other hand, disadvantages are  blurred lines in the digital space between facts, agenda, propaganda and marketing, and the rise of “fake news”, as anyone can “report news.”

In response to democratized journalism, readers and viewers are requiring greater transparency from news sources. The central question is this: what is the source of this content and what is the source’s agenda? Many readers want to know who wrote or produced a story, what expertise they have, and whether the publisher has an agenda. “Transparency matters,” Jordache shared.

According to recent surveys, transparency is among the highest rated values of Millennials (born between 1981-1994/6; 2 billion in the world). In general, they have institutional skepticism. Millennials generally tend to trust less in institutions, which means institutions have to work harder to gain and maintain their trust.

“And when Millennials do dig deeper, the most important qualities that make a destination useful are that they know the source well (57 percent) and that this digital source is transparent and rich with references and links (52 percent),” reported a study on Millennials and news by the American Press Institute & AP-NORC Center for Public Affairs Research.

Jordache next highlighted the risks of Demand-based Journalism, which is the practice of gathering and disseminating the type of news that a news outlet perceives its audience wants.

“If the content is aligned only with the interests of the reader,” Jordache shared, “you have to ask yourself the question: If we only feed readers/viewers what they actually value or what they want, are we being responsible purveyors of truth? And is society really benefiting by taking in only one viewpoint?”

In conclusion, Jordache focused attention on the journalism practiced by communicators within Adventist institutions. His goal was to accentuate the gaps that need to be filled, namely: more coverage of important events and milestones at all levels of the Church; more solid and objective journalism—less public relations writing, more investigative journalism—addressing the “why,” not just the “what”; more appropriate transparency that leads to trust; and, eventually, more collaboration among Adventist organizations around the world to create and disseminate great news.

The course ended with questions from some participants, which Jordache answered with professionalism and competence.