The issue of religious freedom took center stage May 28 in Peru’s national parliament, the Congreso de la Republica. The government of Peru honored Dr. John Graz, Public Affairs and Religious Liberty Director for the Seventh-day Adventist Church, for his international work promoting the right of all people to worship according to the dictates of their conscience.
The chamber of the historic Palacio Legislativo was full as Congressman Julio Rosas presented a medal recognizing Graz's tireless efforts to promote religious freedom. In his address to Congress before the presentation, Graz said, "Religious freedom is not the defense of one religion against others, but it is the defense of the individual right to be different, and to believe according to conscience. We are all threatened by religious intolerance. "Once", so Graz, "I visited a country where believers were persecuted and we did not know about our security. The most dangerous trip I made was on the Island of Ambon in Eastern Indonesia, where thousands of Christians and Muslims were killed in a religious conflict. We met the Muslims and Christian leaders but everything could have happened. God protected us.“
“This medal“, Graz continued, "means a lot to me as it comes not from my religious family. It is a sign that the work we have done as Public Affairs has been noticed and appreciated.“
The prestigious medal comes following a more than 15-year relationship between Peru and the International Religious Liberty Association, led by John Graz. In 2009, Peru hosted the first IRLA Festival of Religious Freedom, a massive event that drew more than 40,000 people to the National Stadium in the capital, Lima. The purpose of the festival, according to Graz, was simply to say “thank you” to the government of Peru for the religious freedom protections enjoyed in the country. Since then, some 30 IRLA Religious Freedom Festivals have been held on six continents:
“In 20 years we held more than 40 congresses and symposiums in 50 countries“, so Graz. "Travelling around the world“, he continued, "spending nights without sleeping, hours in the planes … that disturbs your body and your life totally. I thank the Lord for the health he gave me as I have never been sick and as I never took one day off for medical reasons during 44 years of mission around the world." 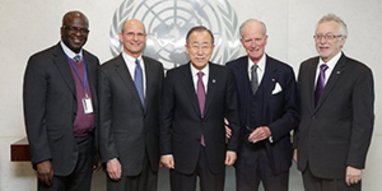 Graz said the Congressional Medal he received belongs to all those who have worked so hard through the years to promote the principle of religious liberty in Peru: “I want to share this honor with my team - in particular with Dr. Ganoune Diop and Dr. Dwayne Leslie (Associate Directors) -  and our Church. Through me it was IRLA and the Church that were honored. My work would have been impossible without the strong support of the Church.“
While in Peru, Graz also gave a lecture at the Seventh-day Adventist Church’s University of Peru, where he was awarded the Fernando Stahl Medal for his two decades of work promoting religious liberty around the world. The medal is named for the Adventist Church’s first missionary to the Peruvian Andes in the early 1900s. Fernando and his wife, Ana, revolutionized the lives of the indigenous people in that area—bringing education, medical care, and spiritual hope.
Dr. Graz is retiring after the GC Session of San Antonio. Dr.  John Graz is a citizen of both Switzerland and France.  He studied theology, history, and sociology of religion in France, obtaining his Master’s Degree at the University of Montpellier and his Doctorate from the SorbonneUniversity in Paris.

John Graz has worked as a pastor and church communication director, in the former Euro-Africa Division (now Inter-European Division).  In July 1995, he was elected director of the Department of Public Affairs and Religious Liberty for the General Conference of the Seventh-day Adventist Church and he has served as United Nations liaison.  In 1995 he also became Secretary General of the International Religious Liberty Association (IRLA).  In 2002 he was elected Secretary of the Conference of Secretaries of the Christian World Communions, a group of world church leaders which represents two billion Christians.

“I had the great benefit to have Bert Beach helping me for a few years. I want to say thanks to him. He kept on covering the inter-faith dialogue and relations and introduced me to many religious leaders. When he stepped down I was following him as Secretary of the Conference of the Christian World Communions".

"With my Team, we organized many Religious Freedom Festivals", so Dr. Graz. " The concept of the festival is the result of a spiritual experience base on God’s promise. The idea ist that if we have the privilege to live in a country where we have religious freedom, we should say ‚thank you’ to God and to the country. Religious Freedom is a gift and when we receive a gift we say: Thank you. Furthermore, we want to send a strong message to the authorities: We love religious freedom and we want to keep it. I led 45,000 people in Lima and Luanda to repeat this three thanks. What a fabulous experience it was!“

Dr. Graz is married to Medina, and they have three sons and two grandchildren. "I am very grateful to my family "for their precious and loving support", concluded Dr. Graz.

The Public Relations Department in the Inter-European Region wants to congratulate Dr. Graz for this important achievement. Furthermore, it wants to express its admiration for Dr. Graz's outstanding mission, restless commitment and huge sacrifice. 'Nothing important has ever been accomplished without passion', and Dr. Graz's 'brand mark' is his great passion for God, for the people and for the mission.Thank you, Dr. Graz!