G.T. Ng, with wife Ivy, speaks after his election as secretary of the Seventh-day Adventist Church during its World Session in Atlanta. [photo: Gerry Chudleigh]

Ng, a native of Singapore, began his ministry in war-torn Cambodia in the 1970s where he and his wife fled before the capital city Phnom Penh was taken by the Khmer Rouge political party. He later worked in various positions in Asia, including that of professor, and eventually received a call to the church's world headquarters in Silver Spring, Maryland, where he serves as the secretariat liaison between the GC and three of the church's 13 world regions.

Addressing the delegates who voted him into the job for the next five years, Ng called the appointment a humbling experience.

"Never in my wildest imagination will I ever imagine that I would ever be put in this position of responsibility," Ng said, "but the Lord has his way."

He replaces Matthew Bediako, who was elected in 2000.

Lemon, treasurer since 2002, said his appointment "was a real privilege and an honor" to work with treasury staff from around the world. He asked that delegates pray for every Adventist member and worker around the globe.

In brief remarks, he also said, "We need to change the soft currency of this world into the hard currency of eternity."

The biggest challenge facing the church over the next five years, Lemon said in a brief interview after his appointment, is the need to increase involvement among young people. 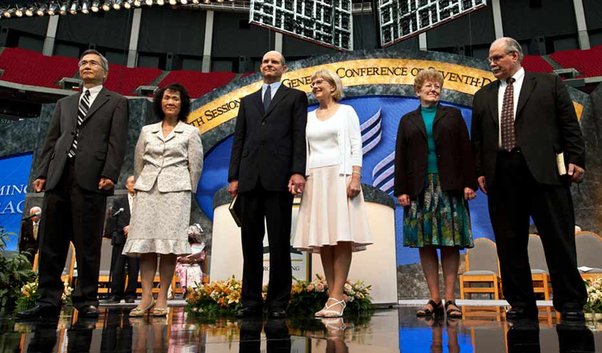