The ZDF team recording in the studios of the Stimme der Hoffnung audio book library.

At 5:45 p.m. on October 23, the German TV Channel ZDF will broadcast a program entitled “With the Future in Mind” (Die Zukunft im Blick), introducing two remarkable individuals each living with a handicap. The recordings took place at the Stimme der Hoffnung media center located in Alsbach-Hähnlein (near Darmstadt), Germany. The program is part of the ZDF series “People – the magazine” (Menschen – das Magazin). 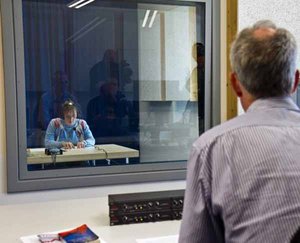 One of the stars is 25-year-old Carina Kühne who has Down Syndrome. In spite of her disability, she is courageously trying to be reintegrated into the work environment. Years ago, she creatively participated in the regular Easter and Christmas programs of the Stimme der Hoffnung audio book library.

Recording with Carina Kühne as she is reading from her own text.

Since its foundation in 1964, the Stimme der Hoffnung audio and Braille book library has been a great help to those who are blind or have sight impairments by giving them a perspective for their everyday lives. In the studios of the Stimme der Hoffnung media center, Christian magazines and books are recorded daily on several different audio media. More than 42’000 CDs are delivered every year to over 3’500 blind and sight impaired subscribers free of charge.

Upon the request of the ZDF, Stimme der Hoffnung provided their studios to record the broadcast with Carina Kühne. Professionally and without fear, she read her own text: “I suffer from the rejection of my fellow men rather than from my anomaly of chromosomes.”

With its wide range of media productions, Stimme der Hoffnung aims to offer hope, meaning in life and counseling while encouraging people to become acquainted with the Bible and the Christian faith.

The media center is run by the Seventh-day Adventist church, which is represented worldwide in more than 203 countries and 66’000 churches with approximately 16 million members.