Bern, January 14, 2012 [tedNEWS/BUC NEWS/CD-EUDnews] As part of the General Conference Revival and Reformation initiative, the Seventh-day Adventist world church’s Executive Committee voted to make “Operation Global Rain,” OGR’s 10 days of prayer, an annual global event each January. This year it was from Wednesday January 4 to Saturday 14. What is OGR? Church congregations, small groups, or individuals set aside one hour each day to pray together. Individuals are encouraged to pray by themselves or with a few friends if they are not near a participating church. During the hour of prayer each day, short sentence prayers are encouraged so each person can pray more than once and should be based on the Word of God.

Many churches and individuals joined the initiative across the world. "Operation Global Rain may be a worldwide initiative, but it is only when it takes place in my heart and life that it ma

kes a difference," states Pastor Victor Hulbert, Communication and Media director for the Seventh-day Adventist Church in the UK and Ireland. He is not alone in those sentiments. Thousands of church members across the country, and millions around the world, joined this initiative that helps focus our minds for the year ahead. Many churches opened nightly for special times of prayer, but more importantly, individual members spent and are spending time praying for themselves, their families, and specific neighbours or work colleagues who need to know Jesus.
The OGR initiative is finished today, and certainly has improved the spiritual experience of those who participated. This initiative is included in the context of the project 777 - Worldwide Holy Spirit Prayer Fellowship, where Seventh-day Adventists around the world are invited to pray seven days a week at 7 a.m. and 7 p.m. for the outpouring of the Holy Spirit's power and presence. Praying any hour on the hour a person will join with thousands of others in another time zone around the world bringing unity. Here are some top stories:
Serbia
Some time ago we organized weekly and daily prayer meetings during 40 days, in the local churches and in members’ homes, where people fasted and prayed for a fresh outpouring of the Holy Spirit. As this happened, a completely new climate began to develop in the local congregations. Inactive church members have become active and more interested in serving others. Those fought with each other for years over different issues (and had even stopped talking to each other!) reconciled, and began making plans for corporate community outreach. Relationships i 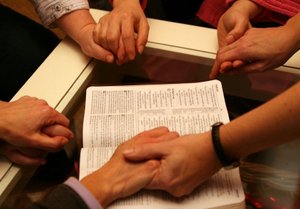 mproved: marriages on the verge of divorce have become happy, parents became closer to their rebellious children, and dysfunctional families became functional again.
These prayer meetings in the local churches have brought new enthusiasm for individual spiritual nurture through reading the Bible and Spirit of Prophecy. We see fresh passion for evangelistic outreach. Church members are more eager to share the good news of salvation, old and young alike. Public evangelistic series have been organized and new people are coming to the churches.
Russia
Three years ago, Pastor Sergei Kovtun of the Briysk church in the South Russian Conference, asked his church members to give him names of friends, relatives and work associates with whom they had a special burden to share Jesus. Pastor Kovtun wanted to know their specific needs, and pledged to pray daily for people in coming months. He also asked his members to join with him in praying intensely for these people. Over the next couple of weeks he received a list of about 50 names, which he hand wrote on paper -- and a prayer journey began.
Now, twenty-six of those original 50 people are baptized, and others are attending church and learning more about Jesus. The transformation in these people's lives has motivated revival for other church members as well.
Zambia
The incident took place in a village in northern Zambia, a hard to reach place with hard to reach people. The villagers as a whole had decided that Seventh–day Adventists were not welcome. The church tried for years to reach out to that particular community but to no avail. However, thank God for perseverance and determination, the church decided to send global pioneer Seed Gabriel Chalwe. Seed, together with his wife and children, relocated with no idea of what awaited them. As he was a prayer warrior, decided to bring this challenge before God. The solution, inspired by God, was to go and preach to the mentally disturbed. He found eleven of them in the village and prayed a prayer of healing. God honored his faith and they were healed. He then gave them Bible studies and they were converted. But God was not done yet. Among those who were healed was the village chief, and when he was healed then converted, he donated land for a village church.

China
Pastor Mark Finley tells of how amazed he and his wife were recently as they attended the Shenyang church in China (just north of North Korea). They found the people to be so committed to Jesus and dedicated to this message. After the sermon on Sabbath, Pastor Finley made an appeal and about 300 people came forward for baptism! The church is now one of the largest SDA churches in the world with a membership of about 6000 though it had started a while backs with only 9 members. Pastor Finley asked the local pastor what was the secret of this amazing growth. The pastor said the real key is prayer to our Lord. We meet each morning from 4:30 a.m. to 6:00 a.m. to pray and 150 or so of our people come every day. These seasons of prayer unleash God's power for growth and revival.