Punta Cana, April 24, 2012, [M.Kellner/AR].  Addressing nearly 900 delegates and guests at the Seventh World Congress of the International Religious Liberty Association, Denton Lotz, a noted Baptist minister and IRLA president, summarized the purpose of this three-day event: "We're here today, because we believe that freedom of religion is basic to all human rights."   That view, sadly, is not shared in many parts of the world, something Lotz said made holding the sessions even more important.   "It's incumbent upon us to work together that we live together in harmony and concord," Lotz said to the audience of le 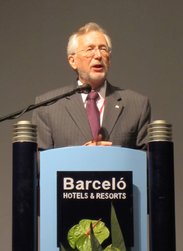 aders from Christian, Muslim, Jewish and other communities. "We don't need religious wars."   That violence against believers remains a problem was evident from a session-opening video presentation noting the death sentences pronounced – but not yet carried out – on Christians in Pakistan and Iran on charges of "blasphemy," and the assassinations of Pakistani officials Salman Tasser, governor of Punjab province and minorities minister, Shahbaz Bhatti. Also cited was the extreme religious repression found in North Korea.
While the main Congress theme, "Secularism and Religious Freedom – Conflict or Partnership" may seem far removed from lands where persecution is active, Lotz took a different view.   "Most people worldwide suffer from a lack of religious freedom. Seventy percent of the world lives in places of religious repression," he said.   Speaking to an audience that included Seventh-day Adventists, Mennonites, Roman Catholics, Baptists, Mormons and Scientologists, among others, IRLA secretary-general John Graz noted the world congress is a multifaceted event.   "This Congress is about religious freedom, but it is not a religious event," Graz said. "We are all here together. We represent different faiths, different religions and different churches. We are different, but we are respectful of each other."   With the theme of "Secularism and Religious Freedom -- Conflict or Partnership," speakers and delegates will attempt to negotiate the challenges of a world which is increasingly hostile to a variety of religious expression in the public square. While standing for separation of church and state, IRLA leader Lotz issued a call for religion to avoid following a secular society's lead.   "When religion becomes secular, I believe it is the greatest challenge to religious freedom, allowing secularism to define what a religion believes," Lotz told delegates. "When we allow the secularization of our faith to transcend the transcendent, it loses its meaning," he 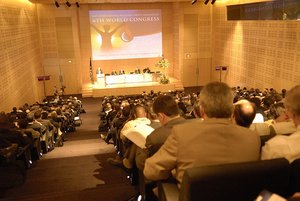 added.   According to Lotz, "Religion will die when it no longer focuses on God, but only on autonomous man. Religion will thrive when it focuses on God."   In a statement read to delegates, the country's President, Leonel Fernandez Reyna, offered "a most cordial welcome to the Dominican Republic, a land of freedom. The Dominican Republic is a place of freedom for Christians, Muslims, Jews and people of other faiths."