Bern, May 1, 2012 [CD-EUDnews/AR]. The reading of the Resolutions of the Seventh World Congress this afternoon was greeted with a standing ovation from attendees. The document, which adds to the existing body of resolutions and recommendations from the six previous Congresses, acknowledges that “secularism” can both be understood in different ways, and describe an array of social phenomena. But the Congress Resolutions conclude that: “…what is problematic for religious freedom is secularism as a totalizing ideology: a worldview that only recognizes secular values, thereby excluding religious values. In contrast, regimes characterized by secularity which seek to establish a neutral framework that welcomes and seeks to accommodate religious differences are most conducive to fostering religious freedom.”

The International Religious Liberty Association (IRLA) in its Seventh World Congress held in Punta Cana, Dominican Republic, expresses thanks and appreciation for the hospitality shown by its people in welcoming us to their country and commends the recent inclusion of the freedom of religion protections in their constitution. As the president of the Dominican Republic expressed most aptly in his message to the Congress, “this country is a “land of freedom” where people of every different faith—or no faith at all—can live and worship according to the dictates of their conscience.”
This has truly been a historic event. It has been the first World Congress to be held in the Inter-America region and the largest IRLA Congress to date, with almost 900 attendees and guests. It has been the most internationally diverse, with men and women representing almost 65 countries.
The Congress received remarks from government officials from the Republic of Colombia, Curacao, the Bahamas, Mexico and Cuba as well as former Ambassador Robert Seiple, the first US Ambassador-at-Large for International Religious Freedom, and Knox Thames, director of Policy and Research for the United States Commission on International Religious Freedom.
Leaders from many different faith groups addressed the Congress, including Dr Neville Callam, General Secretary of the Baptist World Alliance, Dr Larry Miller, Secretary of the Global Christian Forum, and Dr Ted NC Wilson, president of the Seventh-day Adventist Church.
Our attendees spanned the spectrum of belief and non-belief—Jews, Muslims, Roman Catholics, Seventh-day Adventist, Orthodox, Mennonite, Baptist, Mormon, Scientologist, and many others.
This Congress has brought together experts and delegates to discuss the relationship of secularism and religious freedom and to share experiences concerning the ways that secular institutions and secularization in society can benefit and also threaten the right to freedom of religion or belief of both individuals and religious communities.
Participants in the Congress, consistent with the stated principles of the IRLA, recognize freedom of religion or belief as a fundamental human right rooted in the dignity of all human beings. The protection of this right is vital for a just society and undergirds all human rights.

Based on the experience of many countries represented at the Congress it was noted that “secularism” can describe an array of social phenomena, some of which are consistent with and supportive of religious freedom, while others threaten, erode, and potentially undermine it. Over the course of history, the emergence of secular states and secular institutions has often played a vital role in assuring protection of freedom of religion or belief for all. Indeed some ideas identified as secular were the products of religious thinkers and religious thought. However, certain forms of secularism can result in the imposition of inappropriate limitations of this fundamental right.
With these considerations in mind, participants recognized that secularism can be understood in many ways. Congress speakers referred to a variety of conceptions of secularism. One version is “militant secularism,” which is explicitly hostile to religion and seeks to eliminate all signs of religion at least from public space, and in some versions, from private space as well. Another position includes “moderate” conceptions, which call for benign neutrality and flexible accommodation of religion. Still other conceptions of secularism envision affirmative cooperation between the secular state and religion. At the same time, secularism can be a critical defense against religious totalitarianism, providing religious freedom to all belief communities.
The view that emerged during the Congress was that what is problematic for religious freedom is secularism as a totalizing ideology: a worldview that only recognizes secular values, thereby excluding religious values. In contrast, regimes characterized by secularity which seek to establish a neutral framework that welcomes and seeks to accommodate religious differences are most conducive to fostering religious freedom.
This Congress adds to the existing body of resolutions and recommendations from previous Congresses.

1. Call the nations of the world to actively promote the principles of freedom of religion or belief, as elaborated in Article 18 of the Universal Declaration of Human Rights and the body of international human rights instruments.
2. Urge governments to establish laws and create the framework for societal activity and freedoms that produce a positive environment for religious freedom according to international standards.
3. Encourage those overseeing constitutional and legislative reform processes to provide protection of religious freedom which does not benefit a particular faith to the detriment to others and those who practice no religion.
4. Have the IRLA continue to identify concrete ways for individuals and its local chapters to productively engage in religious freedom advocacy, ensuring that such advocacy is sensitive to both context and situation.
5. Encourage individuals, including youth, to take the initiative to become advocates for religious freedom, locally and internationally.
6. Maintain religious freedom as a unique and foundational human right and resist the pressure to accept reductionist arguments which maintain that other rights such as freedom of speech, association, and equality, make religious freedom unnecessary.
7. Reaffirm the statement from the sixth congress that “religious freedom is best advanced when religion and state remain separate in their own respective spheres, that states be neutral to any specific religion, and not hostile to religion generally, recognizing the positive contributions religion can and does make in society.”
8. Reaffirm the statement from the sixth congress “that the less obvious forms of discrimination and intolerance that are manifested in some countries under the justification of secularism be identified. Such issues as the banning of religious symbols in the public sphere, the denial of the right to observe specific days of worship, and refusal of conscientious objector status, raise questions about commitment to freedom of religion or belief.”
9. Recognize that IRLA National and Regional Committees are important instruments for involving the IRLA membership in carrying out the Mission of IRLA worldwide and advancing the cause of religious freedom, and that the formation of more IRLA country and regional affiliate organizations and the recruitment of members who are willing to promote the principles of religious freedom is strongly urged as a means to protect, promote, and defend the principles and practice of religious freedom for all people everywhere.
Recommend to the IRLA Meeting of Experts that they consider the question of the appropriate role of religious belief in the forming and shaping of public policy and the right of religious people to share their views in public forums. 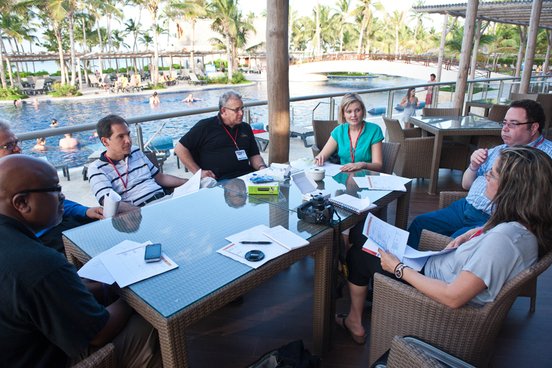