“The Record Keeper,” which dramatizes the epic struggle between good and evil, won the award in the “Best One-Shot” category for "Best Trailer." The “One-Shot” category recognizes episodes still in the final stages of post-production. 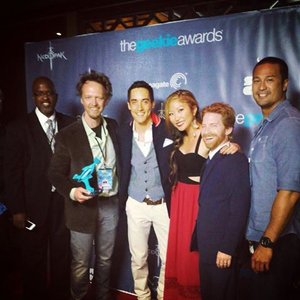 Director Jason Satterlund and Executive Producer Garrett Caldwell accepted the award, accompanied by cast members Aris Juson and Jelynn Sophia. The award show was live-streamed from the Avalon, a historic landmark in Hollywood.

“I feel so honored to be here,” Satterlund said. “We are excited to receive this response on a series that isn’t even out yet.”

Advanced screenings of “The Record Keeper” are expected to begin in October, producers said.

“We can’t wait to show you the rest of the series,” Caldwell said, acknowledging the role of co-creator Rajeev Sigamoney and the two other executive producers,
Ben Schoun and Delbert Baker, both general vice presidents for the Adventist world church.

“The Record Keeper” follows the story of Cadan (JuneSoo Ham) and Larus (Dennis Hill), two angels who struggle to maintain their friendship after universal civil war breaks out. Meanwhile, another angel, Raina (Lindsay Frame), pursues an accurate record of events while trying to make sense of the chaos.

Church leaders said “The Record Keeper” will resonate with people who may not otherwise come into contact with “The Great Controversy" or even the Bible.

“The inspired insights that Ellen White provides in 'The Great Controversy' make the compelling narratives of scripture even more relevant,” Caldwell said. “So many people are expressing interest in [White] as an individual and in her writings as a result of 'The Record Keeper' project. We simply must consider continuing to tell these stories in this manner."

“The Record Keeper” is set in a Steampunk universe. A sub-genre of science fiction, Steampunk features steam-powered machinery, often in an alternate world or fantasy setting.

Watch the winning trailer for “The Record Keeper” HERE.