Barretos, Brazil [AW; Mark Kellner]. A record 35,000 young people, mostly Seventh-day Adventists, from 12 nations gathered in Barretos, in the Brazilian state of São Paulo from January 7 through 12 for the Fourth South American Pathfinder Camporee, a gathering of young people that promotes Christian living and community service.

The Governor of the State of São Paulo, Geraldo Alckmin formally welcomed the participants, who came from nations in South America, North America, Europe, Africa and Asia.

The thousand-club Pathfinders Camporee is one of the largest global projects for spiritual, social and educational support for children and youth. Throughout the year, about 150,000 children and adolescents between 10 and 15 years, meet on Saturdays and Sundays to learn dozens of skills, ranging from how to give first aid to someone injured or how survive in the wilderness and care for the environment.

The city received 850 busses carrying participants predominantly from the Americas, but some also having first traveled from Asia and Europe. An estimated 800 dining areas were designated to feed the attendees

The Camporee also boasted a museum displaying the history of Pathfinders, a shopping mall, a supermarket, bakery, snack bar, police and fire outposts and at least 500 people in charge of security and internal transit.

“It’s a massive structure to ensure safety for all participants,” said Udolcy Zukowski, general coordinator of the event. “We do this type of event once every 10 years because of the logistics [involved]. Pathfinders is an ongoing project: every Saturday and Sunday, the clubs meet for children and adolescents to help them not to get involved in negative activities such as drugs or crime. We teach values that we hope will remain in their lives.”

And while the Pathfinder “city” at the Barretos “Cowboy Park” was a center of youth activity and fun, not everything was centered on enjoyment. Community service and outreach was a major part of the event as well.

In a single day, Pathfinders visited 40,000 homes in Barretos, delivering information on protecting children from abuse as well as an informational “flywheel” brochure on Dengue fever prevention. The following day, 40,000 copies of “The Only Hope,” an outreach book by Seventh-day Adventist pastor Alejandro Bullón, were distributed free of charge.

And on Friday, January 10, citizens were given a DVD with images of Israel, Turkey, Greece and Rome and a special message from the Bible about what happened in these historical places.

On the afternoons of January 8-10, a Health Fair took place at three locations in Barretos, where health professionals and speakers offered advice on eight natural remedies and their use to achieve health. Special features for women’s health were also offered at these locations.

A unique feature of the Fourth South American Camporee was its effort to include people with disabilities. Natalia Paola Blanco is 22 years old, and belongs to the Ebenezer Pathfinder Club, located in northwestern Argentina. She has Down syndrome. “The opening was beautiful,” she said.

Her mother, Elva Blanco, emphasized that contact with the club has contributed greatly to her daughter’s social involvement, communication and learning. It’s also an opportunity for Adventist youth to learn a lesson about equality and social participation.

Elias Santos, 19, is an instructor at the Five Oceans Pathfinder Club, in the Brazilian city of Bahia, and is handicapped. For him, attending the event is the realization of a dream. “I participate in all activities of the club and the guys never disrespected me,” he said.

A childhood friend of Elias, Diego Barreto, said the friendship found in the club undoubtedly influenced Elias to overcome injuries to his left leg. Diego said Elias “ joined the club and then had his accident. But the Pathfinders embrace him, because to us he is not disabled. Besides, he still plays ball with us, and better than me!”

Like Elijah, Leonardo Fontan, who joined the Villa Luzuriaga Herederos Pathfinder Club in Argentina three years ago, also has a physical disability and attended the Camporee. “I like to camp, to participate in events and help people,” he explained. On December 14, 2013, three weeks before the Camporee, Fontan decided to express publicly his decision to follow Christ through baptism, the result of involvement in Pathfinders.

Beyond the campers that were on the ground, another significant group also participated in the event, but with a twist: a Virtual Camporee, with live broadcasts of programming and interaction via social networks.

A virtual version was not something planned by the communications team that coordinated the activities. Rogério Ferraz, manager of digital strategies of the Seventh-day Adventist Church in South America, said the idea arose spontaneously through the Pathfinders who were participating in the webcast. “The initial goal was to bring to the Pathfinders what was going on here for those who could not come, so they could have a sense of what is happening and to share a little bit too,” he said.

Two groups were created on Facebook by the virtual campers, “#CampanhaTrunfoParaOsInternautas” and “I did not go in but I’m in #CamporiDSA.” The groups operated alongside the official webcasts on the CamporiDSA website.

“I was watching the chat CamporiTV, and many [people online] were sad for not being able to go to the program. As I do not like to see anyone sad, I had the idea of creating the group, to get everyone motivated and happy,” said Pathfinder Henry Santos from Porto Seguro, who created the Facebook group with the hashtag #CampanhaTrunfoParaOsInternautas. 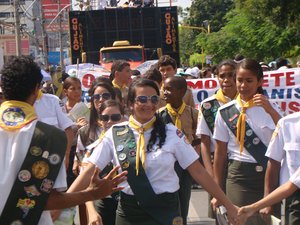 Because they are so connected to what was happening, online participants began to also feel part of the Camporee, and wanted to earn an award for their participation.

“So we created the idea of a Virtual Camporee and started to put some requirements that they could complete to earn an award, something to show that they were actually participating in day-to-day programming, watching and interacting. Fulfilling these requirements, they will be able to win the award,” Ferraz said.

And not only were the pathfinders who were in Barretos that heard the messages of pastor Odailson Fonseca, speaker of the event. Viewers thousands of miles away also felt part of the invitation to the “Meeting scheduled in eternity.” “It was not for the Camporee IV, but I’m connected to CamporiTV... I also have an appointment with JESUS... ‪#camporiDSA #campanhaTrunfoParaOsInternaltas ‬” posted Ana Leticia, Maranhao, on Facebook.

The Internet outreach had its consequences, Ferraz said. One girl, who had planned to attend the Camporee but withdrew at the last minute, saw the online programming and sent a message saying she would return to the church. Another sign of success: 680 online applications for the merit award from virtual participants.