Birmingham, UK [D. Blyden, G. Farmer, CD EUDNews]. A group of creative young Adventists recently held a public art exhibition in a shop window. This unconventional approach to evangelism stimulated many conversations about the gospel with shoppers in one of Birmingham's busiest shopping centres and proved highly effective in reaching people from all walks of life, resulting in follow-up Bible studies with atheists and Muslims alike. 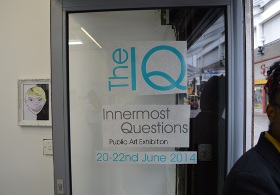 The exhibition entitled 'The IQ: Innermost Questions' featured artwork themed around life's unanswered questions such as the existence of humanity and the origins of morality and was held for three days, 20-22 June 2014.

On the invitation of a friend, art enthusiast and self-confessed atheist, Valerie, explored the exhibition unsure of what to expect. She began to question her own disposition towards disregarding rules and laws. This sparked a lengthy discussion with the team which challenged her thinking and resulted in her accepting the challenge to read the Bible with a different approach. Safi, a young Muslim was in the city centre participating in Islamic outreach when he saw the exhibition and decided to have a look inside. The IQ team were able to give him a tour of the exhibition leading to Safi becoming open to further discussion about Christianity. He is now planning to embark on Bible studies to learn more about Christianity. 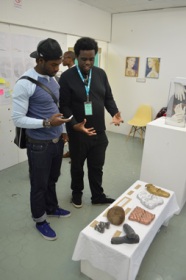 Daniel states, "My whole aim with the IQ project was to make use of the creative skills we have in the Church to bring the gospel outside of the church walls to the people. I saw the perfect opportunity to produce this when a friend of mine opened a shop providing exhibition space back in February. I felt that this could provide the perfect opportunity for us to create a place where we could help the people to meet Jesus through art."

Valerie and Safi along with a number of other visitors who've shown an interest are now being invited to a follow-up event later this month which will explore why the Bible can be trusted.