The Seventh-day Adventist Church as early as next July may decide to take a historic vote on whether to allow women to be ordained ministers.

The decision to allow for a vote was made today by the General Conference Executive Committee at the Church’s world headquarters during the 2014 Annual Council. A vote on women’s ordination could put an end to—or further prolong—a decades-old debate that has threatened to divide the denomination, according to those on both sides of the issue. 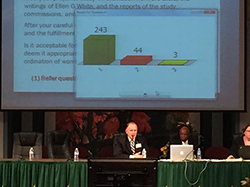 With 243 votes in favor and 44 against, and at the end of daylong deliberation, the Executive Committee agreed to place the following question on the agenda of the 2015 General Conference Session in July, which sets policy for the entire Church:

"Whereas, The unity for which Jesus prayed is vitally important to the witness of the Seventh-day Adventist Church, and;

"Whereas, The Seventh-day Adventist Church seeks to engage every member in its worldwide mission to make disciples of Jesus Christ among people from every nation, culture and ethnicity, and;

"Whereas, Various groups appointed by the General Conference and its divisions have carefully studied the Bible and Ellen G White writings with respect to the ordination of women and have not arrived at consensus as to whether ministerial ordination for women is unilaterally affirmed or denied, and;

"Whereas, The Seventh-day Adventist Church affirms that “God has ordained that the representatives of His Church from all parts of the earth, when assembled in a General Conference Session, shall have authority”

"After your prayerful study on ordination from the Bible, the writings of Ellen G White, and the reports of the study commissions, and;

"After your careful consideration of what is best for the Church and the fulfillment of its mission,

"Is it acceptable for division executive committees, as they may deem it appropriate in their territories, to make provision for the ordination of women to the gospel ministry?" 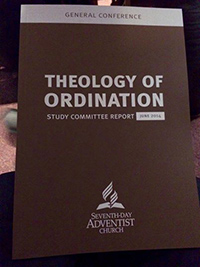 If the question about the theology of ordination is put up for vote, and passes, then leaders in each of the church’s 13 world regions may decide whether to ordain women in their territory.

The proposal voted by the Executive Committee today was brought to the assembly floor as a recommendation from the Church’s top officials and could be considered a creative way of dealing with a thorny issue by taking a neutral-leaning stance.

Some proponents of women’s ordination voted in favor of the motion but expressed strong concerns that the proposal before the Executive Committee lacked a formal recommendation for or against ordination. Proponents fear the issue will carry less weight when the question comes up at the General Conference Session that meets July 2-11 in San Antonio, Texas, United States.

“I think this body needs to give direction to the world church,” said David Weigley, president of the North American Division’s Columbia Union Conference. “We are missing a golden opportunity to give direction. Leaders lead, they give direction,” he said.

“Based on what I see from the history of this particular issue, it seems that the Annual Council has always played a very prominent role in what is passed onto the GC session,” said Heather-Dawn Small, Women’s Ministries director for the Adventist world church. “I’ve seen from the past that what this Annual Council decides influences the GC Session.”

Today's Annual Council’s chairman, Vice President Mike Ryan, suggested that the recommendation needed to be unbiased, and that the ordination question was best suited for the delegation at Session.

More than 20 people spoke on varying sides of the issue.

Alberto C. Gulfan Jr., president of the Southern Asia-Pacific Division, said he appreciates the contribution of female evangelists, but that his region’s constituency “is not ready to move towards the ordination of women pastors.” He added: “We are also supporting this recommendation to bring this to the General Conference in Session and let the world decide on the issue once and for all.” 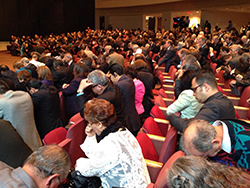 General Conference President Ted N. C. Wilson, who has opposed recent moves for women's ordination that have come before Annual Council, did not express his opinion during the meeting, but indicated before the discussion that he would be willing to adjust his stance.

The discussion over women’s ordination began more than 130 years ago, according to Church archives, and has intensified since the 1970s, especially where members are calling for change, including the United States, parts of Europe, and the South Pacific. The General Conference Sessions in 1990 and 1995 voted down proposals that would have allowed women’s ordination, and the matter has not returned to a Session agenda since then.

However, at the 2010 Session in Atlanta, Georgia, United States, a delegate from the U.S. state of Pennsylvania asked Church leaders that if women can’t be ordained ministers, then what is the denomination’s theology on ordination?

That question led to a commitment from General Conference leaders to open the discussion and appoint the Theology of Ordination Study Committee, or TOSC. The 106-member committee was asked to take a profound look at ordination and provide information to help the General Conference decide how to handle the matter.

TOSC’s response was a 127-page report that was the basis for today’s discussion.

The report, which acknowledged that committee members—who hailed from around the world and met four times, for several days each time—were unable to come to agreement on whether to support or oppose women’s ordination.

TOSC produced three separate statements to summarize members’ viewpoints. Those positions were then explained by three different scholars in a presentation before the Executive Committee; the statements also were printed in the TOSC report.

One position, labeled Statement No. 1, said that only men could be ordained throughout the world church. Statement No. 2 said that entities responsible for hiring pastors should be able to make their own decisions on whether to ordain female ministers. Statement No. 3 said the decision should be left to the leadership “at a proper level” to determine whether ordination “may be appropriate for their area or region.”

While the theology of ordination will be placed on the General Conference Session agenda, the measure’s outcome is far from certain. The nearly 2,600 voting delegates may decide to adopt, reject, or amend the proposal.