Next year’s GYD will be the third annual event that sends hundreds of thousands of Adventist youth and young adults out of church for service projects in neighborhoods and communities worldwide.

The annual event is live streamed, and youth groups participate by sharing their experiences on social media throughout the day.

Youth Ministries Director Gilbert Cangy said the event helps bring unity to Adventist youth around the globe and is a chance to express creativity in service. 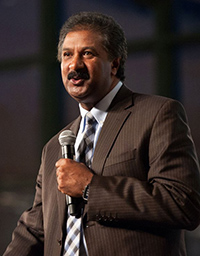 “Just imagine young people leading churches that day to go out and be the hands and feet of Jesus,” Cangy said. “There’s nothing better than mission to bring us together as a world church.”

The event asks youth to skip hearing a sermon and instead go out to “Be the sermon.”

“Our ultimate goal is for GYD to be a springboard for service to become a way of life,” Cangy added.

During the first two GYDs, Adventist Youth from Namibia to Norway visited elderly in nursing homes, sang songs of support to prisoners and offered health and nutrition information in city squares. Many offered prayers for passers-by, all of which added up to millions of acts of service worldwide.

Cangy said he was impressed with the creativity and diversity of initiatives over the past two years.

In Mexico City, youth prepared hundreds of meals for patients and families at hospitals while others in a park invited passers-by to listen to health talks and receive health screenings. In Colombia, youth held prayer stations throughout city streets.

In the Philippines, youth in Manila distributed supplies, prayed with passers-by and demonstrated other acts of compassion before meeting for a “Compassion Walk” from Luneta Park toward Habour Square.

The Adventist world church’s Youth Ministries department is coordinating the initiative through all 13 of the denomination’s world regions.

Promotional resources are available at the initiative’s website gcyouthministries.org.