Seventh-day Adventist publishing house managers, publishing directors and bookstore managers from more than 40 countries gathered in Madrid, Spain, from November 5 to 7 to attend a Special Conference on Publishing and New Technologies.

The conference, organized by the denomination’s Inter-European Division and the Safeliz Publishing House, was attended by several leaders of the Adventist Church’s General Conference, including President Ted N. C. Wilson, Vice President Delbert Baker and Associate Ministerial Secretary Jonas Arrais. The three officers and some department directors of the Inter-European Division also participated. Many attendees said they considered the event a historical milestone for the publishing ministry.

The printing industry and publishing as a whole has been challenged by a developing and highly technological world, leaders said. One of the conference’s objectives was to consider how new technologies could be used in connection with the literature ministry in order to fulfill the mission of the church.

Presenters from various parts of the world came together to share what they are already experiencing in relation to new technologies. 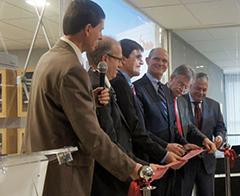 Each presentation was followed by a time of interaction between attendees and the presenters, when both were able to present their remarks. As a result of the conference, the participants were fully engaged and able to better embrace the ideas, applying them to their own situations.

One of the highlights of the event was the launching of interactive books and a Web portal developed by Safeliz with the purpose of supporting literature evangelists in their ministry.

Wilson delivered a special presentation about “Ellen G. White on new methods and the future of SDA Publishing Ministry.” Wilson emphasized that Ellen White defended the need to develop and use new methods to advance God´s work, stating that “publishing in both printing and electronic media formats will continue to be relevant until the very end.”

Safeliz Publishing House, located in the outskirts of Madrid, Spain, also re-inaugurated its headquarters on November 6 following a massive remodeling project. Improvements include a bookstore, museum and a showroom.

Wilson praised the project, saying “the worldwide church is thankful for the great contribution Safeliz is giving to the proclamation of the three angels message of Revelation 14.”

Safeliz is one of the most international publishing houses of the Adventist world church, producing books in more than 30 different languages that are distributed by literature evangelists in more than 120 countries.

Picture: 1. Mario Martinelli, left, president of the Safeliz Publishing House in Madrid, Spain, speaks during the re-opening of the facility after a remodeling project. Joining in the ribbon-cutting ceremony are church leaders from the Inter-European Division, as well as General Conference President Ted N. C. Wilson, third from right. [photo courtesy Safeliz]