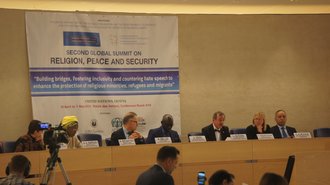 The summit was hosted in the emblematic Room XX, the ‘Human Rights and Alliance of Civilizations Room’, from April 29 to May 1, 2019, in the Palais des Nations of the United Nations, in Geneva.

This second worldwide Global Summit on Religion, Peace and Security, debated the topic: Building Bridges, Fostering Inclusivity and Countering Hate Speech to Enhance the Protection of Religious Minorities, Refugees and Migrants. According to H.E. Adama Dieng, “We all have the responsibility to build bridges, address hate speech, and foster inclusivity if we are really serious about leaving no one behind.”

This prestigious gathering was a follow-up to the First Global Summit, hosted in the Palais des Nations, Geneva, initiated in November 2016 by Dr. Liviu Olteanu, who is also the Director of Public Affairs and Religious Liberty of the Inter-European Region of the Seventh-day Adventists. 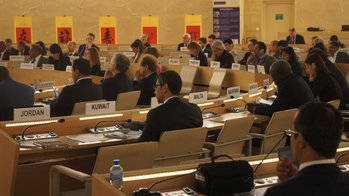 The Chairperson of the Opening Ceremony, Dr. Azza Karam, and Dr. Liviu Olteanu, proposed to the participants of the Global Summit to spend a moment of meditation and prayer. The main points of prayer were for peace and a successful outcome of the summit, and also a moment of silence in memory of all victims of violence and terrorism that has affected civilians and our brothers and sisters in humanity, such as the Jews in Pittsburg, United States; the Muslims in Christchurch, New Zealand; and the Christians in Sri Lanka. It was a moment of silence for all congregations that had suffered major injury and loss of life in unprovoked terrorist attacks that took place during their time of worship. 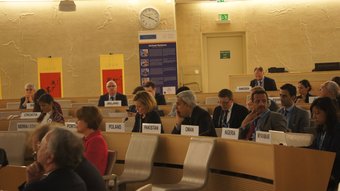 The AIDLR is an international organization founded in 1946 by Dr. Jean Nussbaum, who worked closely and received the special support of Mrs. Eleanor Roosevelt, the first President of the Honorary Committee.
AIDLR defends and fosters human dignity, the principle of freedom of religion and conscience for all people, and human rights and peace on an international level.
According to Dr. Olteanu, the five different actors must partner with representatives at all levels including: national (Ministries of Foreign Affairs, Justice, Education and Culture), regional (such as the European Union, the OSCE, the Council of Europe, the African Union, etc.) and international (United Nations and its bodies) to debate the major topics of international concern, such as the discrimination of religious minorities, refugees and migrants, the respect for differences, peace and security, etc.

AIDLR Video Presentation and Launch of Books
A video on the history of the AIDLR was presented to the United Nations’ ambassadors, the global religious leaders, the academics, and to all other participants at the second Global Summit on Religion, Peace and Security.  In the video, the AIDLR referred to the work developed by the presidents of its Honorary Committee, starting with Eleanor Roosevelt, followed by Albert Schweitzer, Réné Cassin, Edgar Faure, Paul Henry Spaak, Leopold Sedar Senghor, Mary Robinson, and leading up to the current president of Honorary Committee, Adama Dieng, current AIDLR President, Mario Brito, and Liviu Olteanu, Secretary-General. 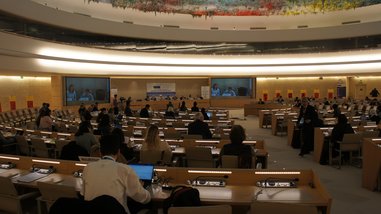 The presentation took place in the Human Rights and Alliance of Civilizations, Room XX, of the Palais des Nations in Geneva. Three books produced by the AIDLR were launched on same day: Agents and Ambassadors for Peace (2016), The Influence of Religious Freedom on Peace and Security (2017/2018) and Diplomacy & Education for Religious Freedom, A Priority for Public Policy (2018/2019): the last two books represent the summary of the First Global Summit from 2016. A special edition of the journal Ambassadors for Liberty, Hope and Peace bringing information on the second Global Summit was also presented. 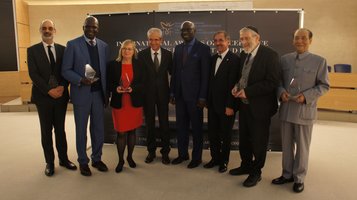 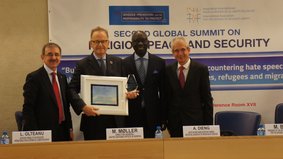 Speakers during the Global Summit.
Among the world-renowned speakers were: H.E. Adama Dieng - Under-Secretary-General of the UN; H.E. Michael Møller – Director-General 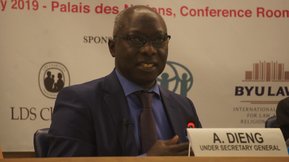 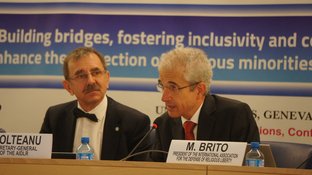 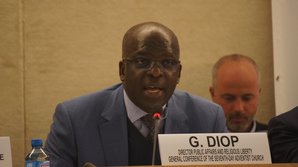 Portugal; Ruben Guzman, Director of Public Affairs and Religious Liberty from Spain; Alberto Guaita, President of the Association para la Defensa de la Libertad Religiosa from Spain; Dr. Liviu Olteanu, Public Affairs and Religious Liberty Director; and many others members from Switzerland, Belgium, Spain, and the United States of America. Because many of them had an active role during the Global Summit, it is likely accurate to say the Adventists lead and propose solutions on worldwide religious minorities, refugees and migrants.

Preliminary Framework for a Plan of Action: Towards a Roadmap for an International Platform on Religion, Peace and Security.
During the last day of the second Global Summit and based on the proposal of the Geneva Global Declaration of Commitment presented by the AIDLR Secretary-General, a group of worldwide experts, religious leaders and diplomats, started to work on a Preliminary Framework for a Plan of Action. The Experts Committee was composed of: Dr. Liviu Olteanu - Chairperson, Dr. Ganoune Diop, Dr. Asher Maoz, Sheikh Muhammad Al-Yaqoubi, Dr. W. Cole Durham Jr., Faisal bin Abdulrahman bin Muaammar, Dr. Kyriaki Topidi, with the later addition of Simona Cruciani, Political Affairs Officer, OSAPG and Ambassador Aziza Baroud. 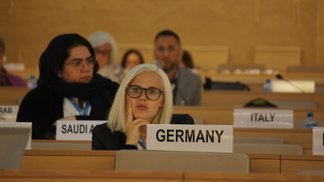 The group of experts started to work on proposals for “A Preliminary Framework for a Plan of Action: Towards a Roadmap for an International Platform on Religion, Peace and Security”. Participants at the Summit – diplomats, scholars, religious leaders, other experts – were also able to contribute to the Plan of Action during the plenary discussions. All proposals received for the Plan of Action will be carefully considered and evaluated over the coming days and will be consequently introduced to Member States, Religious Leaders and All Actors. The Declaration of Commitment will be published later on.

According to Dr. Liviu Olteanu, “Today, more than ever, the world needs a special focus – of all actors – in the prevention of global crises and challenges. The key to combat discrimination, hate speech and violence lies in education that influences and changes mindsets, by public awareness and high-level campaigns such as the second 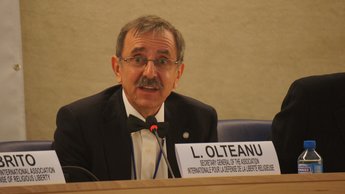 Global Summit, starting by training the trainers, fostering dialogue and understanding of different cultures ad religions. On the issue of human rights, development and peace, nothing of political nature happens by accident!”

But let us never forget: nothing big and special can be done by human power, but only by His Spirit and leadership. We praise the Lord for all the miracles and open doors we could see in co-organizing the second Global Summit.

Details of the Preliminary Framework for a Plan of Action: “Towards a Roadmap for an International Platform on Religion, Peace and Security”, will be sent to the media and can be checked, too, by visiting: www.aidlr.org.