More than 160 people are dead and hundreds more remain missing after catastrophic flooding hit large parts of western Europe. A desperate search for survivors continues despite great obstacles and difficulties. Luxembourg, Austria, Switzerland, France, and Netherlands have also been affected by the extreme rainfall but have not reported any fatalities.

July 20 was a day of national mourning for the victims and those missing in the violent floods that hit the country. Since Wednesday, July 14, Belgium has been subject to violent floods. 120 municipalities, mainly in Wallonia, have been affected by floods considered to be "the most catastrophic that Belgium has ever known". The province of Liège is the most affected by the floods and is, therefore, the concentrated location of most of the rescue operations. The municipalities of Verviers and Pepinster alone accounted for at least a dozen deaths.

According to the July 18 report from the crisis center, at least 36 people are dead and more than 100 people, who cannot be reached, are presumed missing. The search is still underway in the affected areas, but rescue operations are almost complete. 37,000 homes are without electricity in the provinces of Liège and Walloon Brabant - in Liège, the number has fallen to 10,000 homes but they are still experiencing great difficulty in accessing facilities.

ADRA local solidarity on the ground

The deadly floods have also caused significant material damage. Thanks to volunteers from several Adventist churches, ADRA Local Solidarity has been assisting victims in the areas most affected by the disaster.

Due to security concerns, the most affected areas were initially accessible only to residents and emergency services. On July 18, in coordination with the social services, ADRA volunteers were able to go directly to Ensival (Verviers), one of the most affected areas in the country, to assess the exact needs. In addition to clearing debris and evacuating houses that are on the verge of collapse, ADRA volunteers also offered comfort to the victims of this disaster. 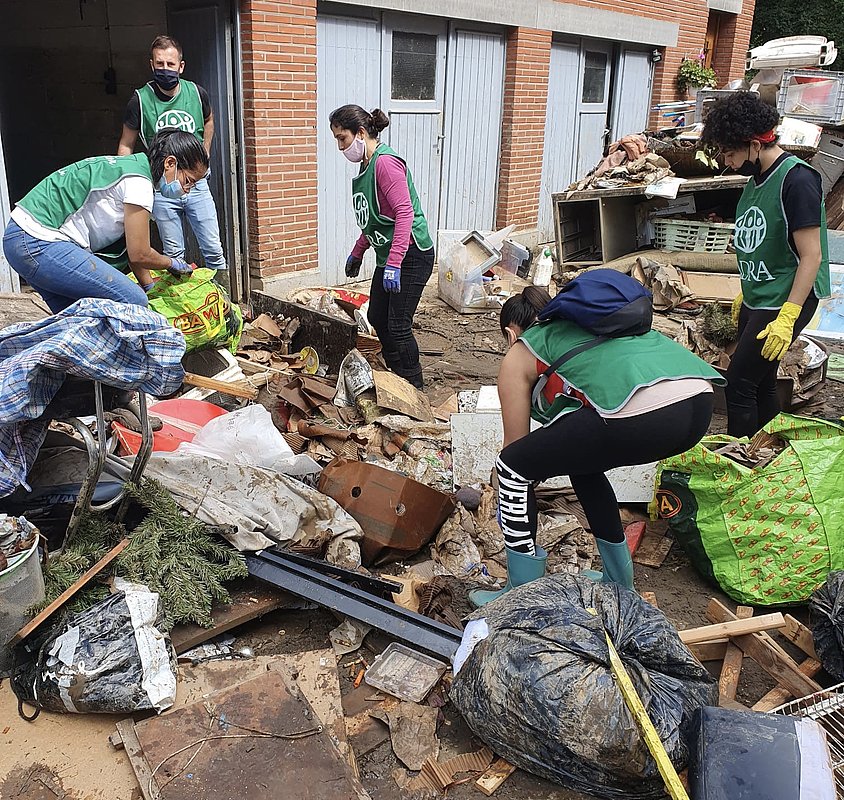 As they did for the 2013 floods in Germany, the Seventh-day Adventist Church, Advent-Wohlfahrtswerk e.V. (AWW), and ADRA Deutschland e.V. have again joined forces to help the affected people in the German states of North Rhine-Westphalia and Rhineland-Palatinate, quickly and unbureaucratically.

With its many years of experience in disaster relief, ADRA takes over the coordination of operations and, among other things, takes care of logistics and the coordination of donations in kind, such as complete kitchen facilities. After the urgently needed first aid, ADRA will also help with reconstruction.

“No Adventist Churches have been severely affected by the storms,” shared Ruben Grieco, Communications Director for the German Union Conferences. “There are some churches where water has run into the basement. From two communities, we were informed that, so far, there is also relevant material damage.”

For the area of Altena (not far from the Adventist Congress Center, Bergheim Mühlenrahmede), the public order office has asked the management of the Bergheim to take in evacuated people. As of July 16, about 30 people who have lost their homes are housed there.

Church leaders ask for prayers for Adventist Church member Birgit Schneider (director of the Adventist Neandertaler senior citizens' home). The retirement home was surrounded by small streams of water so, during the first night of heavy rain, she and her family were outside using sandbags to protect the most sensitive parts of the home. Unfortunately, tree that was nearby toppled over due to the soft soil and hit her. Birgit is in the hospital and has already had various examinations as well as surgery. “There is no longer any danger to [her] life and it currently looks like there will be no permanent physical damage,” concluded Grieco.