Bern, April 26, 2012. [CD-EUDnews]. “The man is as big as his dreams are’ – this motto has driven me in my spiritual life” said Kassabov, Seventh-day Adventists Bulgarian Churches Treasures.
“Coordinated by Euro-Africa region Women`s Ministries Department, we are establishing relations with the Rom community in the town
of Chirpan by education and social work.” 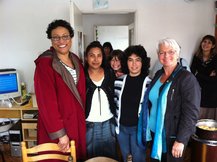 In 2011 the project to organize literacy courses by Women`s Ministries Department was started in Chirpan Bulgaria. It was intended for young and juvenile mothers, teenagers and children with the aim to be made literate in order to have prospects for the future. The project was initiated a lot earlier by the former Director of Women`s Ministries (WM) Department in Euro-African Division Christian Vertallier and later supported by the new WM Director Denise Hochstrasser.
Since her first visit was in the autumn of 2010, she managed to motivate the church members to be involved in it with their gifts and abilities and we started the project two months before the end of the fiscal year. Four women came to the first meetings and we started with them. Unfortunately, their non-believing husbands interfered and forbade them to attend the course. But the interest of the community to our activities was increasing due to the influence of the ch 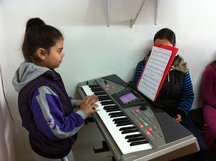 urch members and there appeared new candidates. Therefore it was necessary to be flexible. Some people came up who needed computer courses, family counseling, a knitting course for young mothers and fathers.
On Denise Hochstrasser’s initiative there was developed a ne

w smaller project for musical education of children and teenagers attending the church. For example, about 30 children came to the Sabbath school whose parents were mostly non-believers. They had Muslim origin and their native language was Turkish. In all schools in Chirpan the subjects are taught in Bulgarian so these children fell behind with school lessons and soon left school illiterate. Except musical education we decided to organize weekly professional courses in literacy from my wife who is a teacher.
As we had to hold all these activities in one room of 12 m2,

we decided to enlarge it by removing the wall and including the terrace. Thus it became possible to hold two courses simultaneously. Our goal was to save the heating resources. The extension was realized with the voluntary help of church members and a neighbor whose job is a builder. As a result the master builder was baptized. Meanwhile his wife was involved in the literacy project.
Results so far:
A man was baptized, the knitting course ended successfully, three people received computer training, family communication lectures were delivered. The musical project is the most successful: we have two musical teams – one exclusively from children, the other from children and young people.