Riverside, California/USA [CD EUDNews; P. Copiz; Adventist World; La Sierra News]. Dr. Odette Ferreira received on June 16 an honorary doctorate from La Sierra University. "Her successful work as director of ACA (http://www.aca-noborders.org/), facilitated by her knowledge of several languages and by her educational experience in many countries, deserved this recognition. On the other hand, it is quite appropriate that this doctorate is conferred by La Sierra University, which played a key role in the creation of ACA. As a teacher at the time in our institution at Collonges, France, I well remember when a “wave” of students, from what was then La Sierra College, brought a new dimension to studies abroad", so Pietro Copiz, former teacher at Collonges. 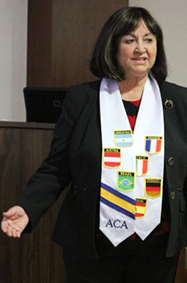 Odette Ferreira, originally from Portugal, is only the third person, coming from the area which used to be called Euro-Africa Division (now Inter-European Division), to be awarded an honorary doctorate by an Adventist University in North America, and also the first woman (the other recipients being Alfred Vaucher, exactly fifty years ago, and Manfred Boettcher). All this underlines the importance of the event.

Fifty years ago an overseas study program launched at La Sierra University when a group of 25 daring students crossed the country and an ocean to learn the French language in France.

First called La Sierra College Overseas, the Adventist Colleges Abroad program is now based in Washington D.C. and has grown since its inception in 1962 to involve Adventist college and university students throughout North America. Courses are offered in 10 languages in 13 countries. All told, about 20,000 students from around the continent have participated in ACA over the years.   Members of that first adventurous student group were recently honored for their pioneering efforts.

In 1962, the initial group of 22 La Sierra students faced an arduous journey to reach their home for the next nine months -- an Adventist college, Collonges-sous-Saléve, France, in the mountainside village of Saléve overlooking Geneva, Switzerland. Before they could sail to France from New York City, they first had to traverse the United States, a harrowing adventure in its own right.

Tom Smith, ACA Pioneer, and two other classmates took off from California in a tiny, white Volvo pulling a loaded down U-haul trailer. “Suffice it to say that the trip did not go well, with multiple repair stops to replace broken parts too numerous to mention,” Smith said. In fact the small car was unable to tow its trailer any further than Needles near the California state line.   Meanwhile Ione Brunt was among seven students and chaperones who traversed the United States to New York in a 1948 school bus renovated with bunk beds, a refrigerator and stove. The bus picked up the abandoned U-haul trailer in Needles and towed it to the East Coast. It took more than a week to reach their destination, Brunt said. 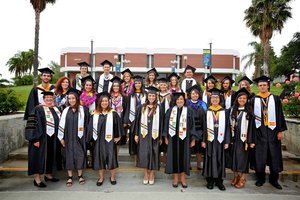 Once in France, the group, led by faculty sponsor and music professor John T. Hamilton and his wife, Arlene, enjoyed a cornucopia of cultural experiences while enduring record cold and snow. They traveled the European continent during school breaks and met Princess Grace in Monaco, visited the famed Louvre museum in Paris and attended a Christmas Eve performance of “Silent Night” in Austria’s Franz Gruber chapel named for the composer of the much-loved Christmas carol. Students also received an education in manual labor. They cleaned animal stalls in the college dairy barn, herded cows and washed dishes.

They enjoyed cultural outings to symphony concerts in Geneva and particularly liked touring with the college choir. “That was lots fun,” one oft he group said. “We sang in all these little towns all over France and stayed with church members. I remember one review in a newspaper that said we sang with an American accent.” 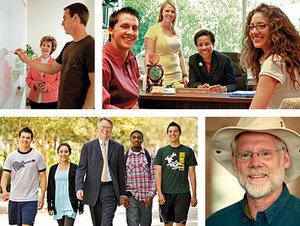 All the schools except for Friedensau also offer summer programs. Adventist colleges in Greece, Japan, Thailand, and Ukraine provide summer programs only.

ACA is a member of the Council on International Educational Exchange (CIEE), the largest consortium for study abroad in the world. Ferreira says she has learned much from CIEE, but adds that “they have also learned a lot from us.”

“We have the church behind us,” Odette Ferreira explains. “That’s an advantage over a non-Adventist school with an exchange program. When one of our students goes to an ACA school, they already have their housing and their meal arrangements in place. CIEE is always looking for housing, for families who will take in the students. But we have our dorms.”

Ferreira has served as ACA director for 15 years. She speaks six languages: French, German, Hebrew, Italian, Portuguese, and Spanish. She holds a master’s in Philology (the science of language), and a doctorate in Linguistics applied to Latin languages.

To learn more about ACA, www.aca-noborders.org