More than a year and a half has passed since Seventh-day Adventist pastor Antonio Monteiro and church elder Bruno Amah were imprisoned in the West African country of Togo in a criminal case without evidence or a trial.

Cards for Monteiro and Amah should be sent to the Sahel Union Office, preferably in English or French. The address for sending cards to these men is:

“Everyone can do something for our members in prison. We want to show them that they are not alone; that they have brothers and sisters praying for them,” said John Graz, director of Public Affairs and Religious Liberty for the Adventist world church. “Every Christmas card they will receive will be an encouragement.”

In March 2012, a Togolese man implicated Monteiro and Amah as conspirators in an alleged blood trafficking network. A police search of the pastor’s home and local church headquarters produced no evidence, but Monteiro and Amah have not been released. 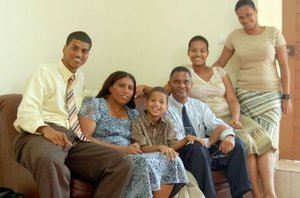 Seventh-day Adventists around the world have rallied to show support for their brothers in Christ. Last December, a social media campaign calling for a day of prayer helped raise awareness of the situation in Togo. Facebook followers interacted with ‘Pray for Togo’ content more than 50,000 times while the Twitter event hashtag reached more than 7 million users. Members are encouraged to visit the website Pray4Togo.com and sign the petition.

Church leaders are also urging members to send Christmas cards of encouragement to Sajjad Masih, who is being held in prison in Pakistan on charges of blasphemy, despite his accuser’s subsequent retraction and prosecutors’ failure to produce evidence of his involvement.

Cards may be sent to Masih at:

Church officials have been working through legal procedures and diplomatic channels to have the three men released.

picture: 1. Pastor Monteiro and his family;