Dr. Peter Landless, Health Ministries director for the Adventist Church, said the stigma of suicide could be reduced with more awareness in society and in religious organizations, which would allow people to seek help more readily.

“We need to talk about it, we need to be available for people to see the Church as a safe haven, so if they feel hopeless they can come find hope in Jesus Christ and renewed purpose,” Landless said. “That’s what we as a Church are all about.”

Landless said church members and leaders can support the effort by recognizing depression, setting an example by living a balanced lifestyle, and urging people to refrain from consuming recreational substances, including alcohol, in order to maintain mental health and emotional well-being.

Landless led an Adventist delegation of five that attended the release ceremony at the WHO headquarters in Geneva earlier this month. These included Valerie DuFour, Health Ministries director for the Adventist Church’s Inter-European Division, Dr. Bernard Davy, medical director of the LaLingniere clinic in Switzerland, Dr. Carlos Fayard, professor of psychiatry at Loma Linda University and Beverly Buckles, dean of Behavioral Health Sciences at Loma Linda. 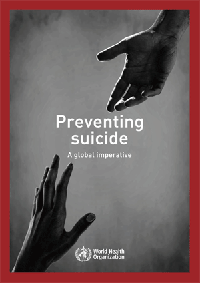 The WHO report, titled: “Preventing suicide: a global imperative,” says it provides “a global knowledge base on suicide and suicide attempts to guide governments, policy-makers and relevant stakeholders,” as well as evidence-based action steps countries can take based on their own context and amount of resources.

“With timely and effective evidence-based interventions, treatment and support, both suicides and suicide attempts can be prevented,” WHO Director-General Margaret Chan said in a statement.

—Suicides take a high toll. Over 800,000 people die due to suicide every year and it is the second leading cause of death in 15-29-year-olds. There are indications that for each adult who died of suicide there may have been more than 20 others attempting suicide.

—Suicides are preventable. For national responses to be effective, a comprehensive multisectoral suicide prevention strategy is needed.

—Restricting access to the means for suicide works. An effective strategy for preventing suicides and suicide attempts is to restrict access to the most common means, including pesticides, firearms and certain medications.

—Health-care services need to incorporate suicide prevention as a core component. Mental disorders and harmful use of alcohol contribute to many suicides around the world. Early identification and effective management are key to ensuring that people receive the care they need.

—Communities play a critical role in suicide prevention. They can provide social support to vulnerable individuals and engage in follow-up care, fight stigma and support those bereaved by suicide.

For more information about the report, visit the WHO website by clicking HERE.

pictures: 1. WHO Headquarters main conference room (Wikipedia); 2. The cover of the WHO publication (WHO)